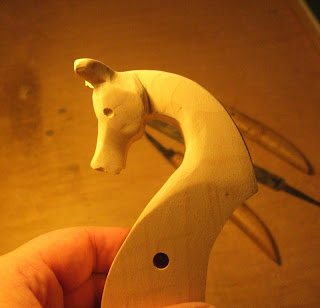 I've never pretended to be a master carver!  Most of the historical fiddles I researched had fairly rustic looking heads. This has aspects of horses, dogs, and dragons depending on how the light strikes it.  I'll finish cleaning it up some more prior to applying finish. The aperture for installing strings is reversed from that on violin-family instruments. They're accessable through the back of the head.

I forgot to take a picture of the head-to-neck joinery so I made a little drawing. I cut a landing on the back side of the neck, parallel to the fingerboard, 3/4" long, and a matching mortise in the head. It was a decent fit. (I had fun pushing a chisel through that hard maple).  A couple of pegs secure the joint from either side.
Posted by Ted Woodford at 11:06 PM No comments: 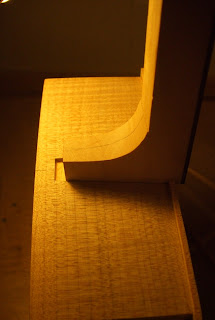 The neck will sit inside a pocket chiseled through the side material. I figured it would disguise any wood movement and add just that little extra lateral stability. The neck is set back at a 2 degree angle. The strings on the Morin Khuur are quite high, about 3/4" above the surface of the neck at the junction with the body. 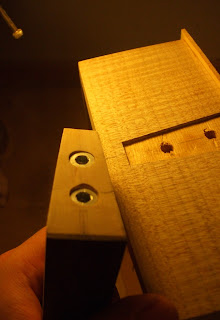 The inserts are set a little deeper than the surface of the neck to allow for some material removal if at some point it becomes necessary to change the angle. I don't see this as an eventuality, but I like to make repairs as easy as possible.  Having done some tests with these inserts, I have every confidence in their ability to hold, even in end-grain.  I did a test once where I suspended a cord through an eye-bolt (in mahogany) and stepped on it like a rope-ladder.  I'm the biggest guy I know, and it held just fine.

The back is braced with two longitudinal braces and a little cross-grain seam reinforcement.  This maple made it into the scrap pile due to a nasty little knot that ran perfectly tangentially across the surface.  It's stable, but I decided to add a patch over it just in case. The back thickness runs about 3.2 mm. 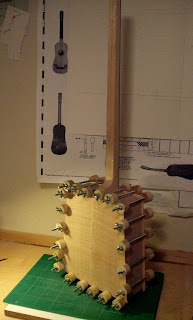 All closed up.  It took some planning to come up with the correct sequence of assembly. I'm not sure this is the easiest progression, (I expect it will be fun grafting the head on to that neck with the body in tow). Still, it has come together nicely and I'm quite pleased with it.
Posted by Ted Woodford at 12:33 AM No comments: 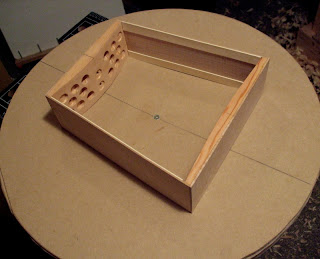 ﻿Here's the assembled rim structure.  For reference sake, it's about 12" (300mm) long, and almost as wide. I fashioned the end blocks from Douglas fir and you can see I've drilled them out to reduce weight. It may be difficult to see, but they are also curved slightly to reduce the possibility of standing waves in the finished box. (Caused when sound bounces repeatedly between two parallel surfaces.)
I rarely use my adjustable spherical workboard for guitars, but this seemed a good opportunity to put it to use. It's made from plywood and 1/4" hardboard tensioned with a machine screw. By cranking down the screw the radius is increased.  I went ahead and pushed it to the limit - it's capable of a 10' radius, which would be extreme on a guitar.  I'm thinking of this Morin Khuur as more of a flat-topped viola.
After scribing the contour of the form on the ribs, I went planed it down to an approximate fit. 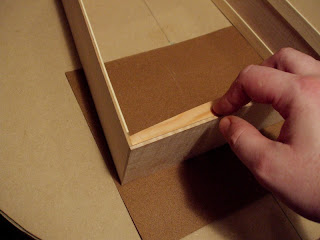 The fit is perfected by sanding. I marked the surface to be refined with some graphite and spent about ten minutes a side working it down until the joining surfaces were smooth and clean. 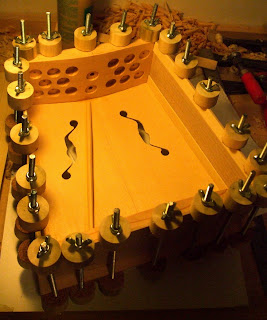 ﻿Later in the day I glued the bass-bar into position using Go-bars and the spherical form as a caul. The violin makers are laughing and pointing.  No. The photo isn't reversed. The stringing on this instrument is actually opposite to that of a violin with the top string on the left hand side when looking at it from the front. Hence the bass bar is on the "wrong" side.  Seriously. I'm not joking. It's not a mistake!
Using spool clamps seemed the way to go.  Given that this is a flattop, I decided to splay the bar out to cross more grain and resist the downward tension. There will be a soundpost installed as well. The top thickness is 3mm (.0120")
I decided to attach the neck using machine bolts and inserts and I've predrilled for those holes.
﻿﻿﻿﻿﻿﻿﻿﻿﻿﻿﻿﻿
﻿
Posted by Ted Woodford at 11:02 PM 2 comments: 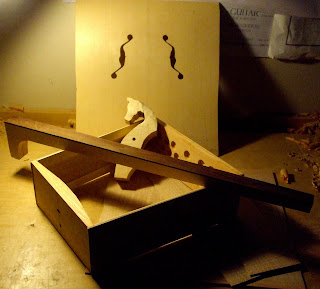 Some time ago I was contacted by a music student who casually asked if I could build an Igil or a Morin Khuur.  It took a second to pull the information out of the dark recesses of my brain's instrument archive.  I knew they were Chinese or Mongolian.  "I don't see why not.", was my reply.

The idea took root. These instruments are associated with the Tuvan culture. Tuvan music is characterized by peculiar modal octave harmonies. You may be familiar with the Mongolian throat-singing tradition  I decided on the Morin Khuur, which loosely translates to "Horse-head fiddle".  It has two strings and is bowed something like a viol, being held between the knees . What's really interesting is that the strings aren't stopped on the surface of the board, but "pinched" against the side of the fingernail or fingertip.  The sound produced is a shimmering raspy tone. It's evocative of wind and wide open spaces.

I've finished the rough work and will undertake assembly this week. As it happens, I managed to find all the materials necessary in my cast-off pile. There's a good stiff Sitka top, bigleaf maple for the sides and back, (rejected as guitar sides due to a knot), some rock maple for the neck and pegbox, and a slice of rosewood for the fingerboard. So far the only thing I've had to purchase was a piece of steel to reinforce the neck. It feels good "salvaging" these woods.