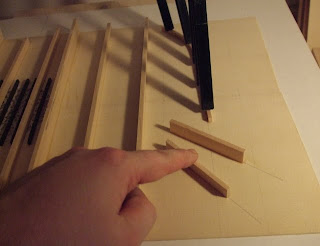 I'm gluing braces today. Go-bars are one of the idio-syncratic tools developed by luthiers to facilitate clamping with minimum headache. Given that the soundboard is so thin, the spans long, and the assembly awkward, the go-bar deck is an elegant solution.

My go-bars are salvaged strips of glass-fibre reinforcing. They appeared one day at Lee Valley Tools for sale on the "scratch and dent" table and I grabbed a bunch at $.75 a piece. They're not a regularly stocked item. Here I'll be gluing the treble bars. You can see that I've already got the bass or "J" bar in place. 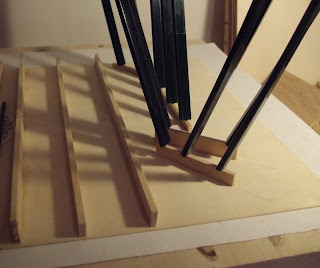 I dab on the glue and press a bar into position, flexing it between my purpose-built table and the bulkhead above. The bars provide firm, even pressure. Another nice feature of this system is that the intersecting corners remain free and clear for me to get a chisel in there to remove squeeze-out.
Luthiery buffs who specialize in guitars might note that the grain in these braces runs parallel with the soundboard, contravening modern wisdom. This is historically accurate. Surprisingly, there is little difference in stiffness over a given span between this orientation and that of vertical grain assuming bars of similar dimensions.

I suppose the early lute makers would have used weighted blocks spanning several braces, or perhaps they simply relied on a "rub joint", where the bars are pressed into place with a little sliding motion and held until the hot glue seizes and begins to gel.


I like the way the deck looks when the bars are set up. It's a neat piece of sculpture.
Posted by Ted Woodford at 11:06 AM No comments: 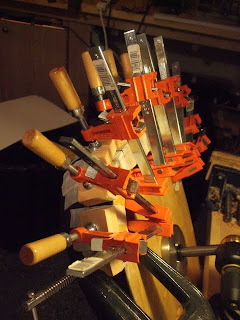 Not the most romantic processes going on in the shop just now. Here, I'm employing a forest of clamps to affix what is known as the "end cap" or "clasp" to the bottom of the ebony lute bowl. It is a well known woodworking maxim that one can never have enough clamps. There's a genial competition going on, and the one who reaches their demise with the most, wins.

For those viewers interested in making early instruments, (thanks for all the kind words and encouragement, fellows!) take a look at the item holding my mold. It's a Veritas carving vise and I am thrilled with it. The faceplate rotates and pivots easily, and locks firmly for carving. Worth every penny. 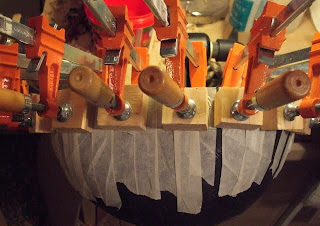 It might be overkill. All I know is that it's hard to achieve perfect mating between the two surfaces due to the three dimensional nature of the form and in this case, the re-curve. (By the way, this is the ebony strip that I cut too thin. I glued it to some .5mm black-dyed pear and the joint is pretty much invisible. As a plus, it was actually easier to bend!) 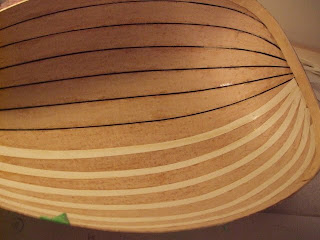 On to one of my least favorite steps in the lute building playbook. I went down to my local art supply store and purchased some quality paper from Dave Kuruc. (Kuruc is Hamilton's version of Keven Bacon, only more so. He's so well connected in our city that we can play one degree of separation using Dave.)
Anyway, he had some nice Waterford rag paper which we deemed appropriate for the task. Mainly because it resembled my name. 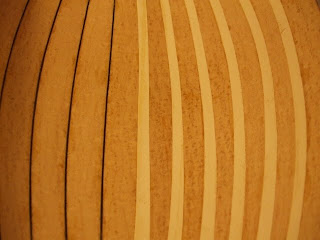 I've got four bowls to reinforce. I cut the paper into 1/2" strips and got it good and saturated with glue. The disagreeable thing is trying to get the strips stuck down perfectly over each rib joint. The glue wants to stick to my fingers more firmly than the paper wants to stick to the bowl!
Eventually they settle down, I scrape the next joint clean, go back and rub the previous joint to smooth out any bubbles and so on. This takes a lot more time than one might expect. I aim for some sense of regularity but it's all hidden from view when the top is glued in place. 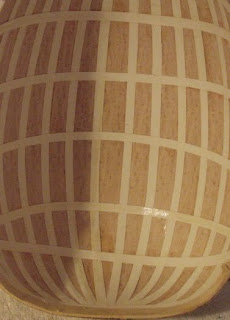 Then, I add lines of longitude. In many preserved examples, this papering was done with strips cut from early printed works or manuscripts. Recycling isn't a new idea. Paper used to be a very valuable material given the amount of labor that went into producing it. Greek Bouzoukis usually have a lining of elaborately embossed gold foil. Perhaps I should get a platen press and print something to spice up the look of my own lute interiors. You may note a little patch of glistening glue on the last strip I adhered. Fear not. It dried matte.

In the next few days I'll be working on making some cases. That should prove more interesting than watching this glue dry.