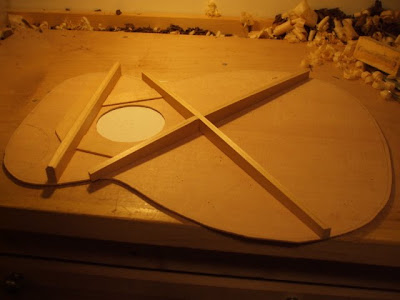 It's time to brace up a steel-string top. I rely on the tried-and true X-bracing system. Here, I've glued the supporting members above the soundhole. I don't play around here - these are large in dimension and made from the stiffest spruce I have in my stockpile. So much of the guitar's longterm stability relys on the support system that carries the fingerboard and transfers force to the sides of the instrument. My x-brace however, tends to be a little lighter than the typical factory instrument. When coupled with adequate design, this will increase the output and sustain. A delicate balance is required. I pay very careful attention to the interlocking lap joint which occurs at the intersection of the X. This has to be perfect. 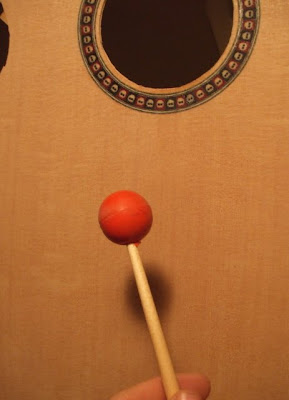 I shape the X brace by paring away at it a little at a time. I use auditory information to help arrive at the proper dimensions. Before doing this work, I'll put on a pair of hearing protective headphones for an hour. All extraneous noise is eliminated from the shop. I want to be attuned to the task, my sense of hearing at it's optimum. I excite the soundboard with this little mallet I made from a superball and a stick. It gives me a more uniform and repeatable tone than my knuckle. I don't tune the top to a particular note - what I'm looking for is a certain clarity and complexity to the tone when I tap in various areas. This is augmented by using my thumb and forefinger to gauge the flexibility of the top. At a certain point, I'll get the impression that the top is flexible enough to provide good projection (without being floppy), and will have arrived at it's optimum response sensitivity. This is different for every guitar.
Following the shaping of the main braces, I'll glue on the secondary bars. This is all done in a special shaped carrier I made for my go-bar deck. I don't use a spherical dome, as is so often the case. The spherical design is an excellent aid to speeding production, but I prefer to graduate the degree of arch in the soundboard from nearly flat at the fingerboard end to a gradual arch of about 1.5mm in the center of the lower bout. I see no benefit to the severe doming employed by some luthiers. Some degree of arch is necessary of course, to alleviate of the tendency of the soundboard to crack in dry weather. The arch also counteracts some of the deformation caused by string pressure. The scalloping in the main braces below the soundhole allows a greater degree of sensitivity. I definitely strive to make the top much more flexible as it approaches the area of the sides. This produces a larger active vibrating area, which in turn gives us more volume. 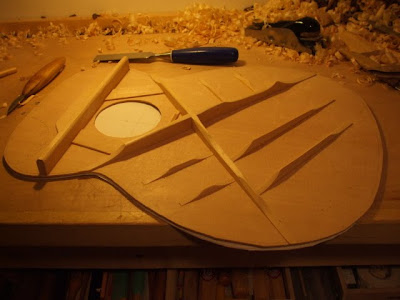 Posted by Ted Woodford at 2:23 PM No comments: 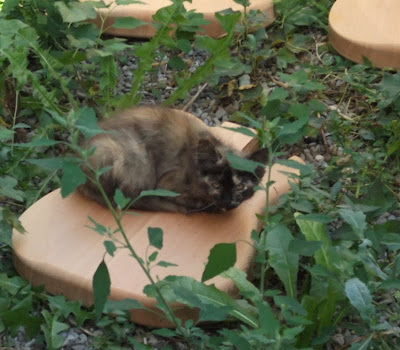 This little creature has been visiting every day for the last week to check on progress. He/She has definitely picked out a favorite instrument for napping on. Puns abound. Perhaps it wants to play "Cat Scratch Fever", "Cat's in the Cradle", or simply holler, "Go Cat, Go!" before tearing off into a wicked four bar rockabilly solo. Dunno. But one look in the eyes, and you know you'd better keep your hands off that guitar.

Posted by Ted Woodford at 6:27 PM No comments: 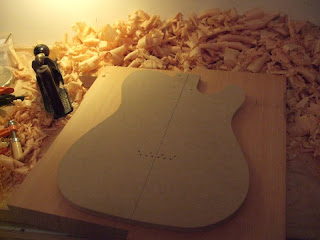 Here's the beginning of a project that I don't expect to see completed for quite some time. I had a bit of a trans-cendent vision when driving back from the Lute Society symposium in Cleveland this summer. Passing countless farms and fields I was struck by the wonderful colors and textures present on the fence posts and barns. It solidified an idea I've had brewing in the back of my mind for a while.

I've always been attracted to objects that show a heavy patina from use and age. The leather of a well worn baseball glove. The polish that develops on a tool handle from much use. I'm not much of a fan of modern synthetic finishes and their bulletproof gloss that locks wood away in suspended animation. In thinking about music and what it means to me, I'm reminded that it's the human quality and variation that makes it exciting. In a world where AutoTune can smooth and polish the human voice into robotic uniformity, I cling to old recordings and live music to grab hold of something inherently truthful.

A while back I recall reading about a guitar that had been commissioned by Billy Gibbons of ZZ Top fashioned from a plank taken from the walls of a ramshackle cabin that was the birth place of blues legend Mckinley Morganfield, aka Muddy Waters. "How exciting!" I thought. The emotion was immediately replaced by a feeling of real disappointment when I finally saw the instrument. I was picturing a weathered gray body, fissured and cracked, bleached by Mississippi sun and scoured by floods and rain, a real embodiment of the place and conditions where the blues was born.
Instead, luthier John Bolan had produced a slick looking white guitar, with racy pinstripe and rockstar-ready shape. I'm sure it sounds great.

I purchased a beautiful plank of quatersawn Douglas fir. I know that Doug fir is a staple in dimensional lumber used for house framing in western parts. We don't see much of it around here. For our framing, spruce is the mainstay. Douglas fir is incredibly tough stuff for a softwood. It has a neat texture.

I glued up blanks using Gorilla Glue, a polyurethane adhesive which is excellent for outdoor projects. Waterproofing is important, given the treatment I'm going to subject it to. My choice of body shape hearkens back to the first mass-produced solid body electric, the Fender Telecaster. I've made a few small stylistic changes to the shape. Also, I've never understood why Leo never went back to update some of the comfort issues he addressed in the later designs. I've gone ahead and increased the radius on the edge and planed a relief chamfer where the forearm contacts the body.

And now, into the gravelled area of our back yard which at one time served as a dog run. I've let it go fallow for two summers, and it's become rather untamed. I'll let them sit there, turning occasionally, to soak up sun, rain and snow until I feel they're properly aged. (Interestingly, this hearkens back to the days when I turned bowls. Unsuccessful examples occasionally went outside for a few years to weather, and they ended up looking great!) 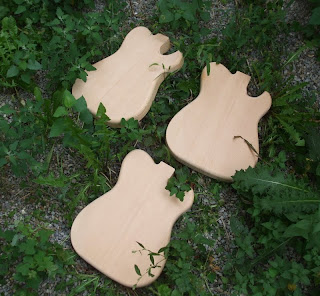 Posted by Ted Woodford at 12:05 PM No comments: