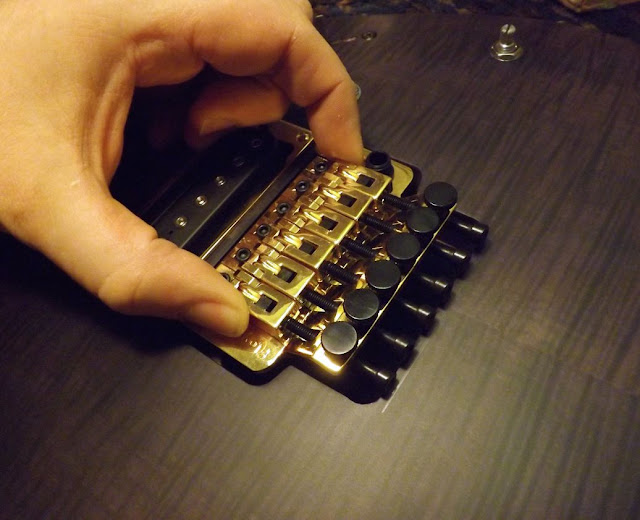 Recently I was asked to do some work on an Ibanez RG series guitar.  The owner wanted to add some pizzazz with new gold hardware and replacement of the factory-installed Edge series tremolo with an upgraded authentic Floyd unit.  He'd ordered the parts and realized that some extra fitting would be necessary. 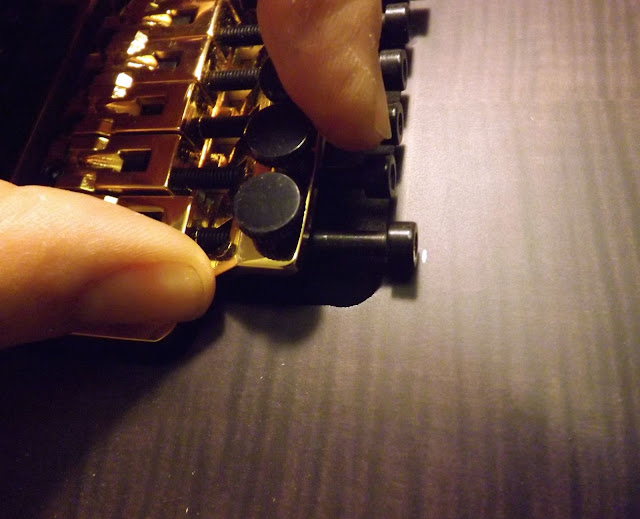 The string locking screws protrude a bit farther on this model. 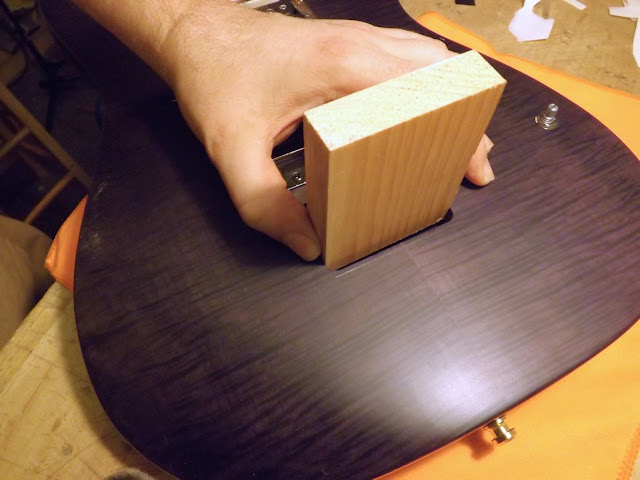 To make a custom-sized routing template, I first took a block of 3/4" (19mm) pine and planed it so that it fit snugly within the cavity. 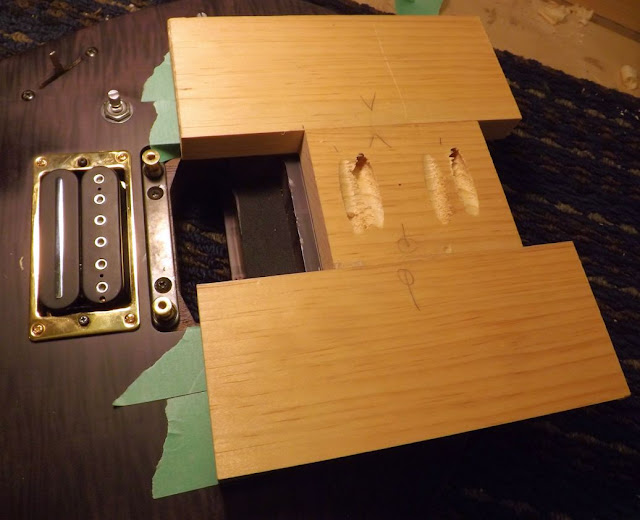 Using pocket-hole screws I quickly added a couple of side wings to the block, producing a platform with an opening exactly equal to the width of the cavity. As an aside, you can see damage to the finish along the back edge of the cavity caused by efforts to prop the bridge up during string-changes. I usually suggest changing each string individually, or using a block padded with cork to prevent this. 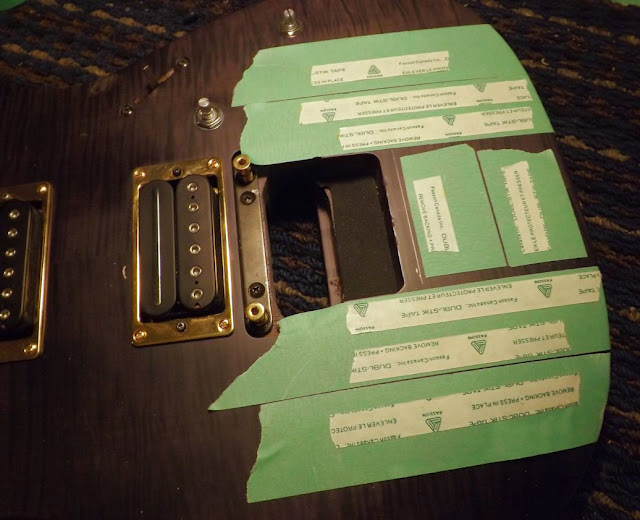 My high-tech method for keeping the template in place involves lots of low-tack masking tape against the body, to which I can press down my incredibly strong double-sided tape. This keeps things very secure but I don't have to worry about leaving residue or pulling up the finish on older, more fragile instruments. 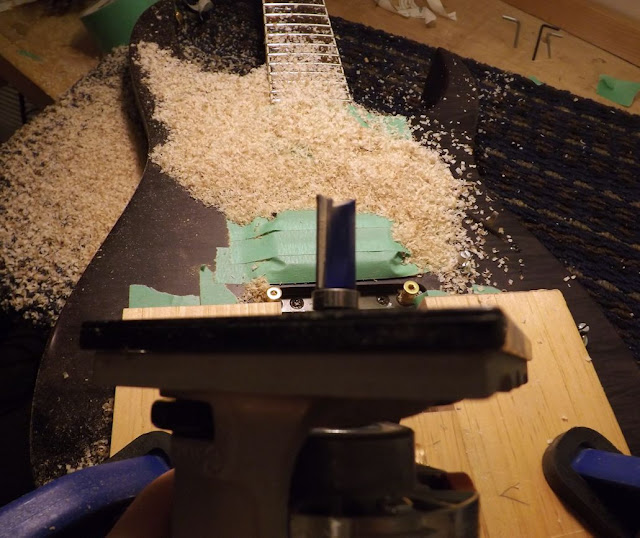 1/2" (13mm) flush-trim bit, lots of shallow passes. Don't try to hog off too much material. Cover the pickups because this is a messy process.  I added a couple of clamps to hold the jig in place, but only for peace of mind. They've only been tightened lightly, and the body is resting on a heavily padded surface. It's possible to dent the lacquer on some instruments with too much clamping pressure. 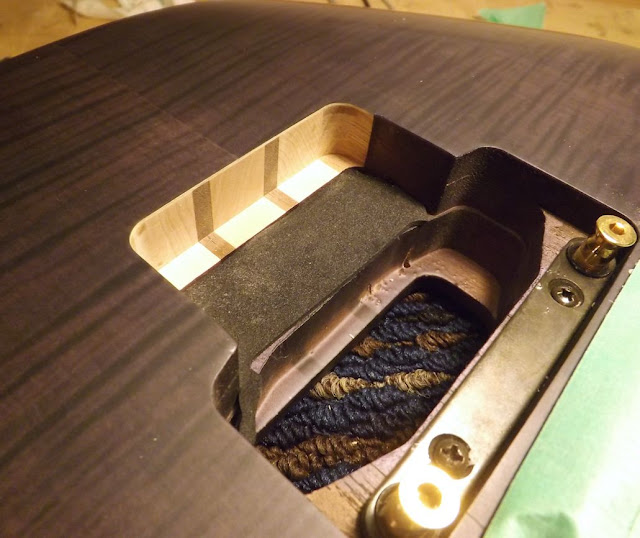 There. Clean as a whistle. The original rout for the pocket is actually tapered and quite irregular. As it happened, the mounting holes for the bridge studs were a little off-center too. Ibanez leaves a little bit of room to fudge the bridge position, and that's easy to do with the Edge series, as it has a flat blade rather than a radiused bearing surface as found in the original Floyd Rose.  It's a good idea to feather the razor-sharp edges of the fresh-routed pocket with fine sandpaper to prevent future chipping. I darkened the wood up with a coat of stain and it looked nice. 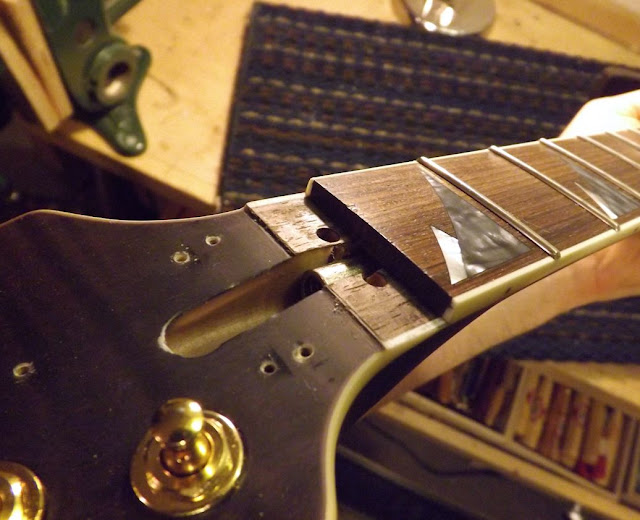 The aftermarket nut he'd purchased was high, and playing was stiff. I reckoned the nut would need to come down about .020" (.5mm) The landing surface was tilted a little, and I had visions of the binding delaminating and other horrors.  I decided to take material off the bottom of the nut instead. 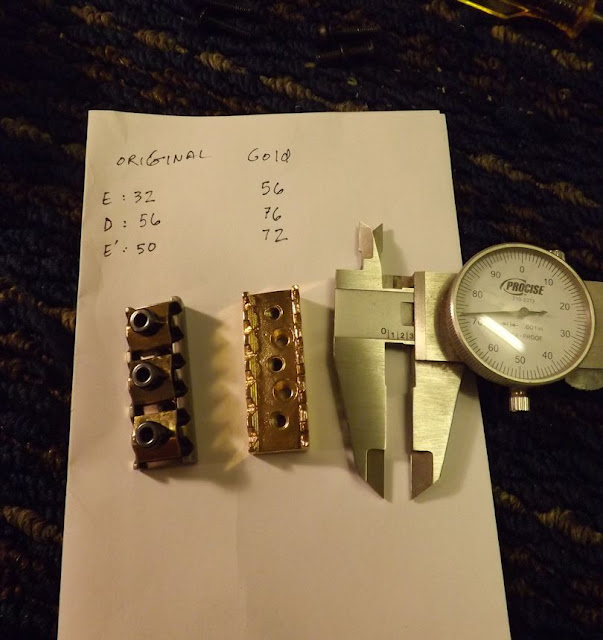 I measured distances from the bottom of the string grooves to keep track of progress. 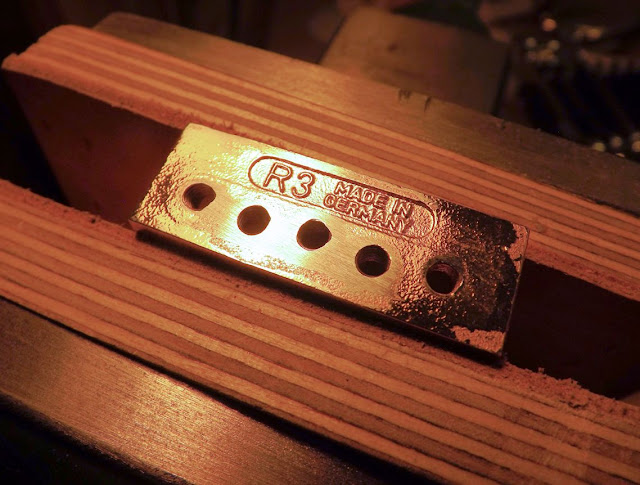 The nut casting is really quite rough. A couple of passes with the file revealed that the perimeter of the screw holes was a high spot. I took it to my rotary sharpening platter and used a course disc to gradually work my way down until I reached the correct depth.  It's not a job to rush, and you have to measure constantly. 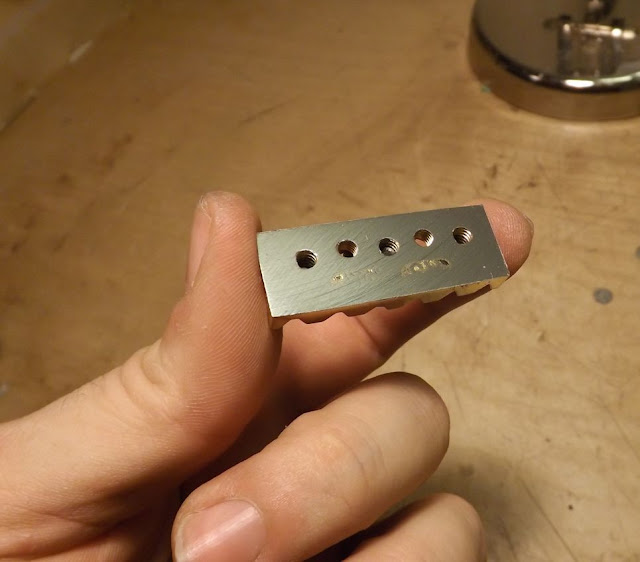 Much better. It's flat, to the correct dimensions, and ready to install!

Posted by Ted Woodford at 3:58 PM No comments: