I recently decided to close the small retail office space I've been using to meet customers for guitar repair consultations, pick-ups and drop-offs.  It represented a sizeable chunk of my operating costs, but more than that, I found myself losing a lot of time just driving to and from.  I couldn't do much actual repair work there and it seemed wasteful.

Having customers come to my home is okay, but I don't really like the idea of having to escort them to my tiny little basement shop. It's very crowded in there and having to remove my current projects from the bench to clear a space every time someone shows up is less than ideal.

I recalled the number of useful shop fixtures we managed to adapt from IKEA furniture when we were setting up the shop at Lee Valley, and had a look through the catalog. My idea was to build a small workbench that could sit in our front room. Something that wasn't too offensive-looking.

I found the Forhoja kitchen cart and realized it would work nicely with some additions. I made a full-length drawer for tools, a backsplash to carry a sliding base for an angle-poise office lamp, and an adjustable neck rest. So far it's working well. 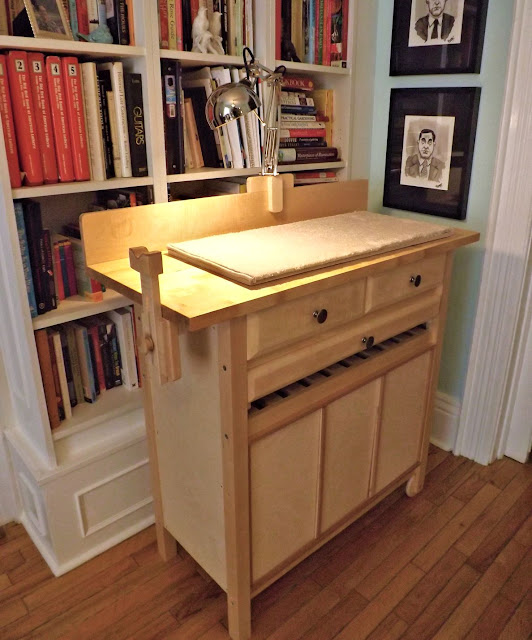 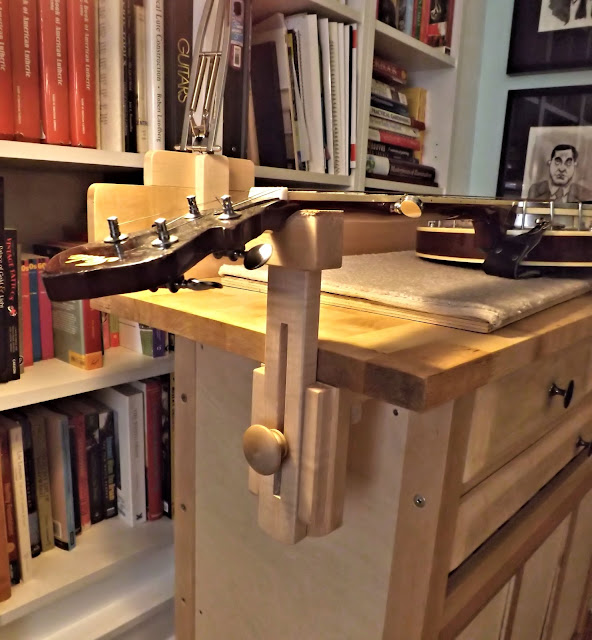 Posted by Ted Woodford at 12:14 PM No comments:

Video detailing the construction process of an armrest in curly maple.

Posted by Ted Woodford at 3:40 PM No comments:

A short video describing my process for making the pyramid-style guitar bridge used by C.F. Martin and other early American guitar makers.

Posted by Ted Woodford at 1:26 PM No comments:

You Just Can't Beat It. (Until you assemble it, that is).

Something a little different. I made a busking drum kit that fits into a suitcase.

Posted by Ted Woodford at 8:04 PM No comments:

A short video describing my procedure for making decorative tiles for rosette inlays.
Posted by Ted Woodford at 3:57 PM No comments:

Nathan dropped by with his Ibanez RG series guitar. Last year we dressed it up with some gold hardware and a new Floyd Rose tremolo.  At the time we swapped out his pickups for a pair of used Ibanez humbuckers that were never quite satisfactory. Over the years Ibanez has come up with countless combinations of pickups and there is a dizzying array of wiring schematics on the web, not all of them useful.  Some require specialized model-specific switches to allow combinations of coil splitting, and series/parallel output. 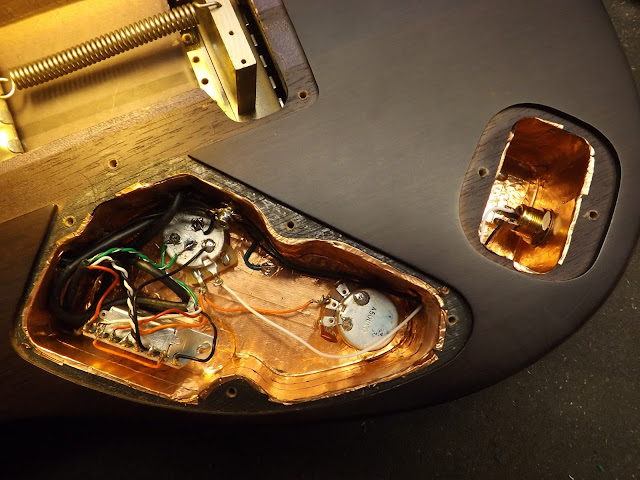 For quietest possible operation, here's a thorough shielding job involving copper tape in every cavity. Recently I've been trying something new.  Shielding wisdom promote the idea of "star grounding", wherein every grounding wire is run to a common point connected to the ground lug on the output jack.  This reduces ambient hum from induced grounding loops.

Most often the back of the volume pot is specified as the common point. This poses some challenges. There can be upwards of 7 different wires leading to the same surface, and the heat required to melt the solder and get a good joint on one wire will often loosen another! Very annoying.  It also complicates things if you need to switch out the volume pot.  I've been adding a screw near the pot to which I attach all the "permanent" wires from the different shielded cavities, the bridge and so on.  Encapsulated as it is within the copper cage, there seems to be no audible increase in hum. 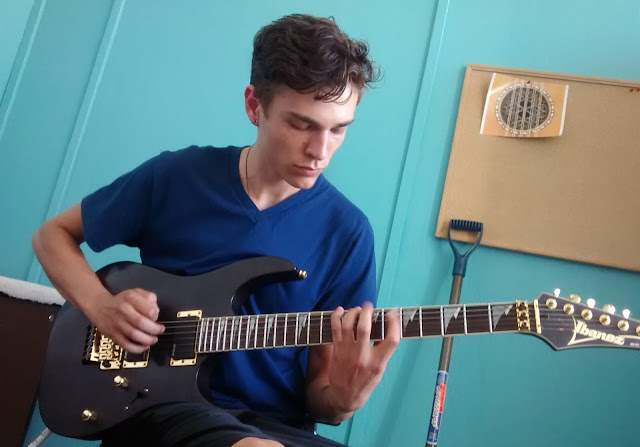 We replaced the pickups with H4's from EMG, which looked right at home in the Ibanez.  The sound of the H4A alnico in the neck position was particularly gratifying and Nathan was very happy with the results.

Posted by Ted Woodford at 9:03 PM No comments: 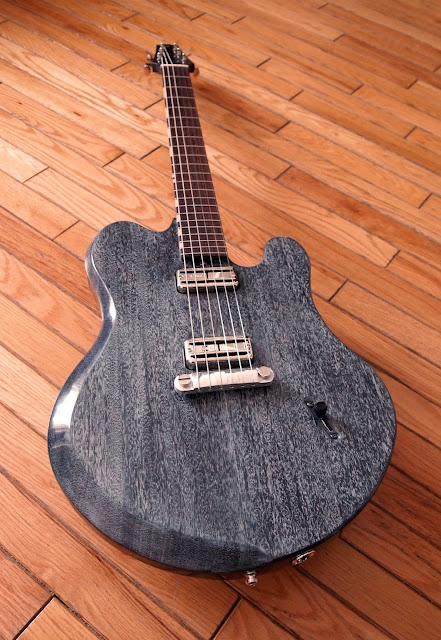 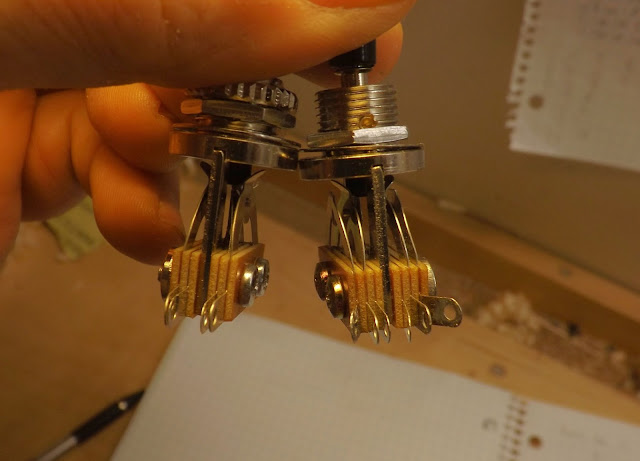 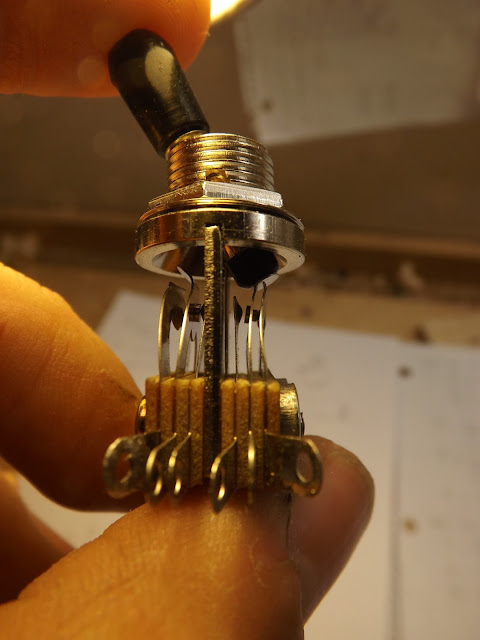 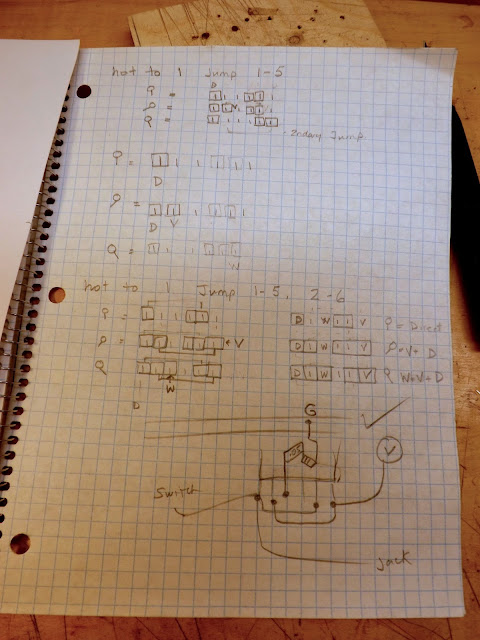 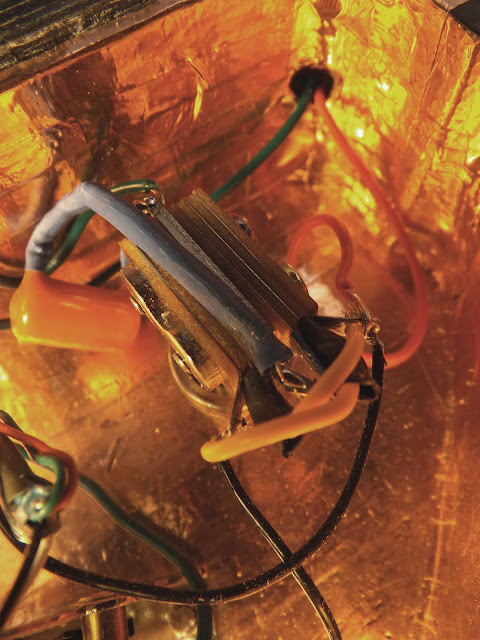 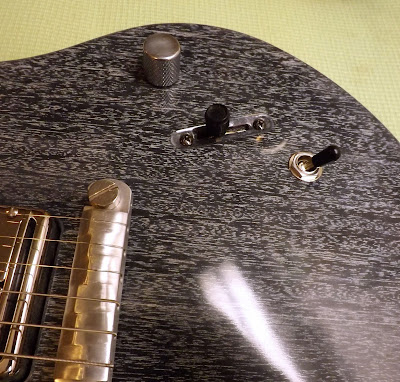 Okay.  You asked for it.

Lately I'm being inundated with requests for information about the morin khurr I put together several years ago. Every week there's at least one email from someone - all ages, from all walks of life, and from around the world.

Let's be clear. I'm not an expert in traditional morin khurr construction. I built only one, using techniques borrowed from guitar making. It's playable and the owner is very pleased with it.
There was no resource material available to me when I began the project, and I scaled the dimensions up from a photograph I found online. As luck would have it they were very close to those I later measured when I got my hands on an authentic instrument.

So far, of the many people who have contacted me about building them, I've only seen one person follow through and complete a morin khurr (it was amazing).

I'm not going to teach you luthiery via email. It's just too difficult. If you're the inquisitive kind of person who wants to build an instrument you need to develop self-reliance and trust your instincts. I'm providing the basic dimensions but I'm leaving details and construction techniques up to the builder. This should be enough information for people with some experience building guitars, violins, or other stringed instruments to get started on a plan of their own. (Click on the image to enlarge and then you can right-click to save to your computer). 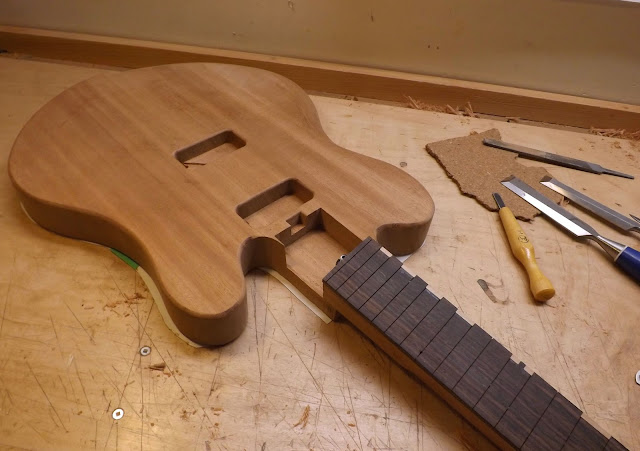 My current project is an electric with several unique design elements. It's a chambered solidbody made from Spanish cedar and I'm having a good time working with the customer to craft something that addresses his style of playing. I'll post an update when it's complete.

Cutting neck pockets by hand is really the only way to ensure the best possible fit. It's slow but satisfying work.
Posted by Ted Woodford at 4:41 PM No comments: