The card in my little point-and-shoot camera gave up on me this week, taking with it several process shots.  Suffice it to say, -I added some binding around half the back, scraped it to size using single-edge razor blades, and tinted it with orange shellac to approximate the color of the existing binding. I put a little on the bare spots on the sides where the finish had flaked off too, but I didn't try to get into exhaustive lacquer repair. This guitar is almost 90 years old and it looks it.

The Stew-Mac tuners went right in the old bushings with no fuss. They seem to be made to much closer tolerances than the old ones. I introduced a beefy set of .013 -.058" medium strings, as I imagine this thing spent most of the dustbowl years strung with Black Diamond baling wire.

Here's a video of me fumbling through some period-appropriate tunes. I apologize for the sound quality. If I do this again I'll get an external microphone.

There are some places where the kerfed lining is missing.  These are the greatest little clamps. I found them one day at the dollar store, six in a package. I used to use clothespins wrapped in rubber bands, but on triangular binding like this if one doesn't get the placement just right they tend to pull the lining strip up. These things have swiveling pads. Rotate the inner pad out of the way and there's a little notch that keeps everything exactly in position. 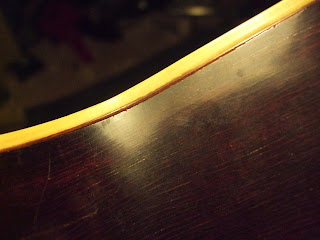 Here's a little opening where the top is lifting. I used a palette knife to get the hide glue in there and clamped it in place with spool clamps. 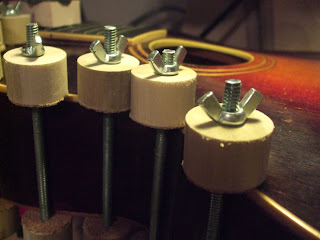 The back was installed in the same manner. I know I'm going to put a coat of spirit varnish over the sides, otherwise I'd be more careful and  use short lengths of drinking straw over the threaded rod to be certain it doesn't scratch up the surface.  The back went on pretty well. There's one area in the upper bout that must have shrunk some across its width, or the sides have sprung a little. It's just shy of a perfect fit. 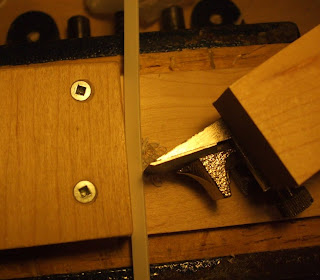 The binding is quite narrow. I used my veneer scraping tool to shave a little off the height to keep it from tipping inwards during installation. 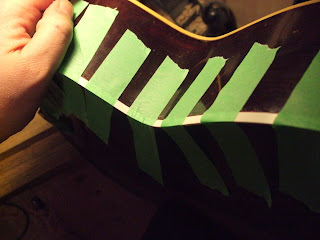 This is ABS plastic. (The original is celluloid). I picked up on a trick from John Calkin and the crew at Huss and Dalton who use Tightbond glue to secure plastic bindings. Roughing up the inner surface with 80x sandpaper provides enough tooth for good mechanical adhesion. (Better than you'd imagine). It cleans up much more easily than the solvent based plastic glues - they have a tendency to liquify the surrounding finish. This old lacquer is crazed and chippy. Low-tack tape is a must! 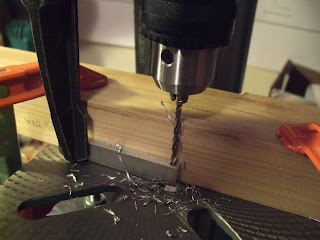 The missing tailpiece string retainer had me scratching my head. I found some photos of various original designs. Perhaps the original was made of nickle-plated brass. In the end I decided to fabricate it from aluminum bar stock.  My first attempts with a 1/16" drill ended in failure. Too much heat and friction and the bits kept breaking off in the aluminum.  I beefed up the hole diameter and used a countersink on each side to provide a soft transition for the string. 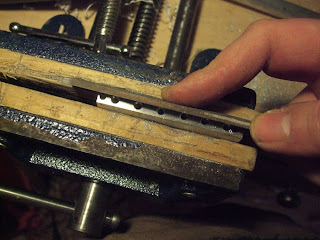 Smooth radius to prevent string breakage and a place for the ball-end of the strings to sit. 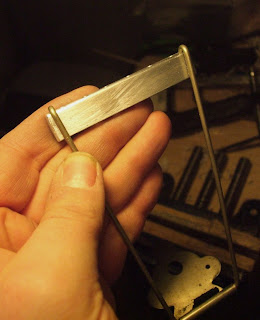 I resisted the urge to buff it up to a mirror shine. It'll do the job and it doesn't call attention to itself.


Posted by Ted Woodford at 1:37 PM No comments: 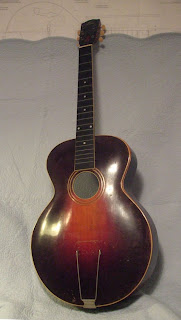 Or is it? There's a bit of a mystery.  There are so many shifting style attributes that I'm not exactly sure despite some study.  I do know it was manufactured in 1926, as the serial number (82941) - falls nicely into that year's sequence. Unfortunately the area on the label where the model number was inked has fallen off! 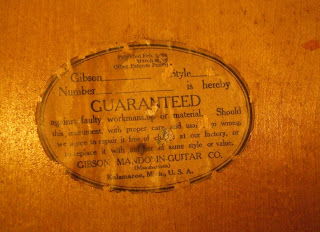 At any rate, this is a guitar which spent some time in the unforgiving temperature and humidity cycles found in Texas, and it needs some care.  It's 13-1/2" across the lower bout and features a 24-3/16" scale. Side depth is 3". The fingerboard joins the body at the 13th fret and the shape is very much like the L-1 played by Robert Johnson in a famous photo. 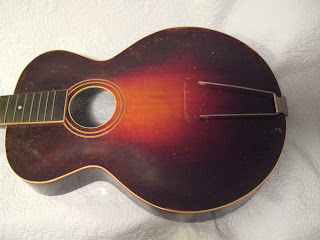 There are a few things missing. The string retaining portion of the tailpiece has disappeared. That's not uncommon in earlier L-series instruments, as it was fabricated from volatile tortoise celluloid that eventually rots away. By 1926 I believe it had been replaced by a steel retainer. I'll probably have to make one, as finding a replacement would be difficult. No bridge, either. That's not so hard to deal with though. As for the pickguard? I won't be making one of those. 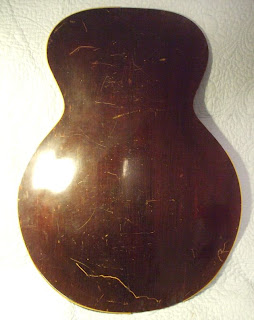 The back has come off cleanly. It's suffered some scuffs which I'll try to minimize. About half of the single-ply binding has fallen away. I'll replace it and do my best to match the color. 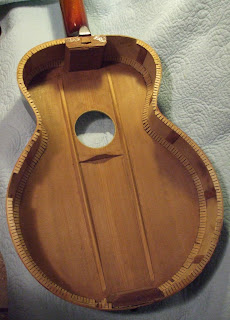 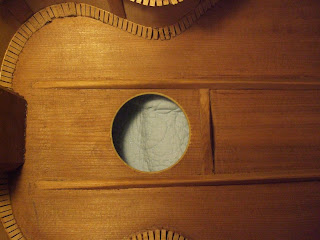 The lining is surprising in just how irregular it looks. There's disparity in the size and spacing of the kerf. 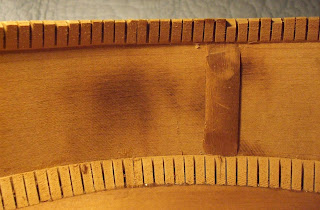 This instrument must have taken a hard knock. The lining broke along the grain, and the glue held firm to the back. These are maple sides, and there's evidence of scorch marks from bending. The Spanish cedar reinforcements seem about the size and profile one might expect to see used for a flat-top back joint reinforcement strip.  Notice the marks from a circular saw on the side? 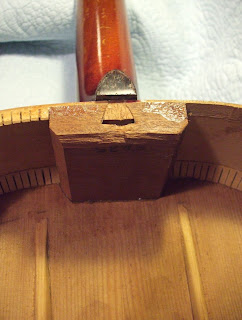 The dovetail is holding strong. The soundboard has a number of pencil marks on it, denoting the locating points for braces. I don't know why the head block is so gnarly. The glue squeeze-out on the back suggests it always looked this way. 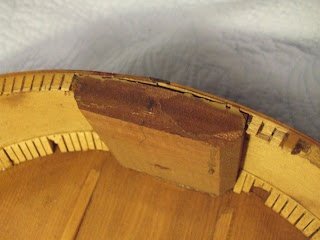 The tail block is similar in execution. You can see that it's come loose from the side assembly. Based on observations I've made from the case, I imagine this guitar was stored upright in its case in a garage or some place similar. Moisture wicking through the concrete eventually deteriorated the case covering, migrated through the plywood and started affecting the glue joints and finish where the instrument sat against it. 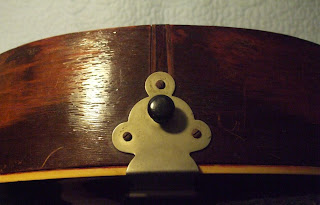 The lacquer is flaky and it's down to bare wood in these areas on either side of the wonderfully graceful screw plate. 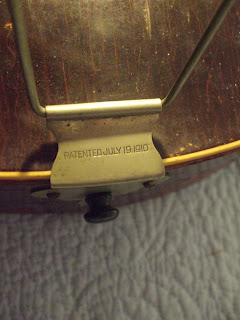 The temptation to spend $14 and throw on a modern replacement was there, but... no.  I'd like to retain these funky period-appropriate details. 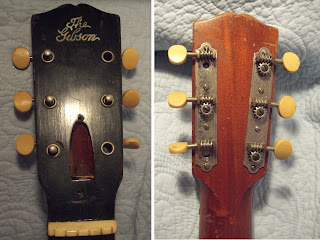 The tuners are missing posts and cogs. As luck would have it, Stewart-MacDonald has just recently started offering replacements for this style of three-on-a-plate tuning set. And hey! -There's a truss rod!  That's good news. 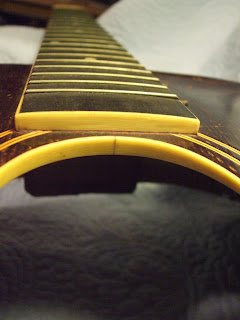 The neck is in great shape. It's very flat and the frets are in excellent condition. Note how they stop short of the binding and are beveled, as opposed to the fancy method Gibson later used on bound boards where the binding was left proud and filed down into a little nub on the end of each fret. The neck is generally wide. 1-25/32" at the nut, 2-1/4" at the 13th fret.  It's a substantial piece of mahogany. 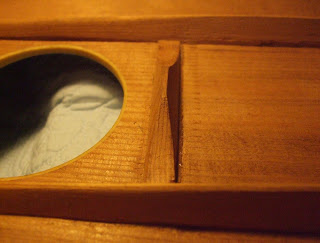 More interior details. They vigorously scrubbed the glue off around the soundhole brace with a chisel, compressing the grain. The main braces are obviously hand shaped, but they're strangely rough down at their junction with the soundboard. Like, ...really rough. 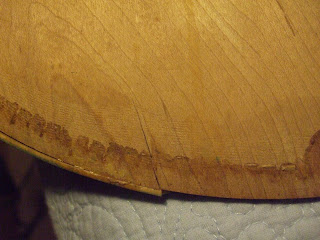 The back has two cracks, one in the upper bout that runs roughly parallel to the back joint, and this one down by the tail block.  If you look closely you can see that the entire perimeter gluing surface has been scratched up -scored with the teeth of a fine handsaw. In those times it was thought that a slightly toothed surface provided better glue adhesion. We now know that a perfectly smooth surface is better. 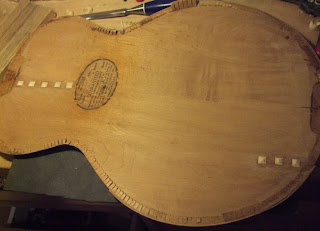 Step one is to glue and cleat those cracks. I see that the Gibson guys didn't want to waste time masking the soundhole when they sprayed. There's a nice line of lacquer overspray across the back. I'm debating on whether I should remove and re-line the whole back. All that kerfing is inviting though- it acts as a perfect registration for re-alignment, and the glue is obviously still going strong. I might just remove it from the bare places. I don't want to inject too much water into this old wood.