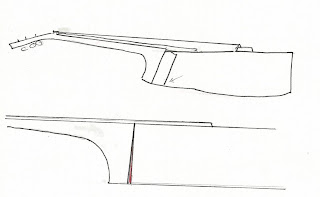 How do you get the neck off?  It's a question I've been asked quite a number of times. When a steel-string guitar has an excessively high action and a very low saddle it's usually time to think about re-setting the neck.  People often assume that the neck of the instrument has bowed forward under string tension. It's true, there is a tremendous amount of force working on the guitar, trying to bend it. Often though, there's a more localized distortion that happens where the heel block area has tipped forward as can be seen (greatly exaggerated) in the drawing above. Students at Timeless Instruments build with an integral heel block and Spanish foot, and the geometry works quite well at spreading the forces over a larger area by coupling to the transverse brace in the upper bout.  Even if one decides to use a separate neck and block, it might be a design upgrade to incorporate the foot into his or her neck block.
I'll remove a narrow wedge of material along the edge of the heel where it makes contact with the body, effectively tipping the neck backwards by about a degree. 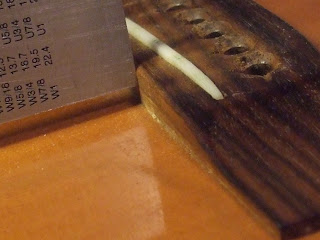 A straightedge laid across the frets meets this dreadnaught bridge about halfway between its surface and the face of the guitar, and the action at the twelfth fret is uncomfortably high, almost 1/8" (3.1mm). It's best if the straightedge contacts the top of the bridge, leaving some room for action adjustment in the height of the saddle.   This is a Canadian instrument built in the early 80's by Claude Boucher and Robert Godin. It was an inexpensive but well-crafted guitar aimed at serious students. 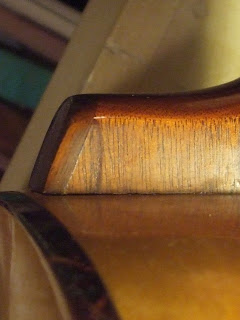 The heel is actually pulling away from the body as the fingerboard dips down and the neck lifts. 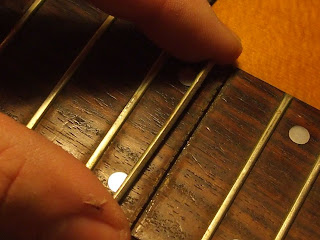 The first step in taking the neck off is to remove the 15th fret. There is a small airspace left in the dovetail cavity which I'll access by drilling a hole at a slight angle towards the body end of the guitar. This can be a gamble.  I've worked on one other LYS instrument, and that one had a neck joint typical of Martin-style construction. 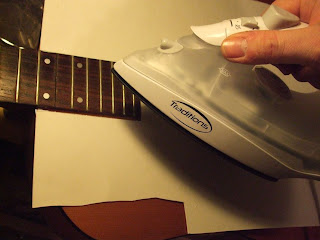 I've cut a piece of heavy poster board to protect the finish as I lay an iron directly on the fretboard extension. The metal frets transfer the heat to the board. It takes a couple of minutes to reach working temperature. 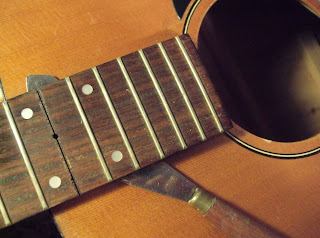 This is a thin and flexible palette knife that I've ground and filed to just the right thickness. It's a thin blade but the edges aren't sharp. I work it into the glue joint from both edges until I reach the edge of the body. 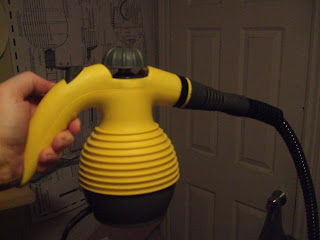 This is an inexpensive steam cleaning device I bought at a local discount store for less than $20. It comes with a flexible hose attachment.  I do not encourage the reader to modify any similar device, and I will not be held responsible for any injury that may occur from trying to emulate my methods.  Pressurized live steam is dangerous. 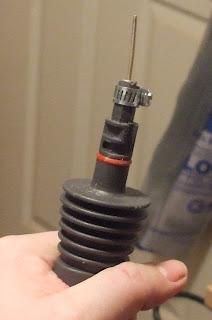 I drilled and tapped the end of the hose fixture to accept a needle used to pump up footballs and basketballs. I also added a tiny hose clamp, figuring the more support around the needle the better. 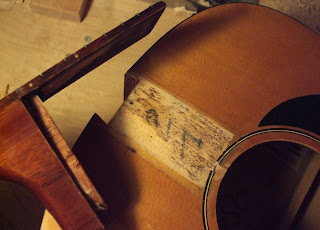 I injected steam into the dovetail cavity for about 3 minutes total, stopping once to clean up the water which condenses around the joint. The trick is to position the guitar in such a way that water won't flow into the body. I used a couple of well-padded clamps and gentle taps from a plastic mallet to separate the two halves of the joint. This was actually the tightest fitting neck I've encountered. You can see that a little fillet of spruce stuck to the fretboard. I was able to peel that off carefully and reattach it. The dirty looking area is resin which seeped out of the rosewood. I carefully scraped and sanded the surface clean. 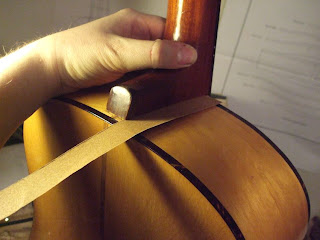 To establish the neck angle I used strips of 120 grit sandpaper. By pulling the strip, the end away from the fretboard encounters more abrasive and more material is removed, pitching the neck back. I take five passes on each side, then test with the straightedge. This neck required 40 passes on each side.

Some yellow glue (not epoxy!) and careful clamping, and it all went back together again.There's almost always some fretwork necessary beyond replacing the one I removed, as the fingerboard extension will settle into some slightly different geometry and odd buzzes will occur. The action at the 12th fret is now more friendly, and the neck is sitting flush with the body again.