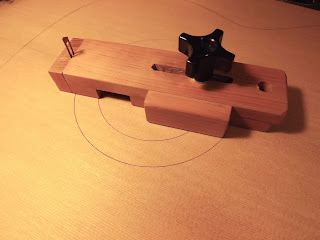 I recently spent some time making and installing rosettes, and I've updated my methods a little with some high-tech gadgetry since the last time I outlined my procedure.  Here's a little compass cutter I use to outline the channel.  This produces a much cleaner margin than simply plowing through with the router.  The scalpel blade is compressed by a block simply screwed to the beam. It rides right on the surface and cuts to a depth of 2mm.  There is a 1/4" (6mm) pin which protrudes through the soundboard and into a bushing housed in a workboard beneath. This makes adjustments really precise.  A bolt ties the beam to the platform with a plastic speed-knob. Simple, and it works like a charm. 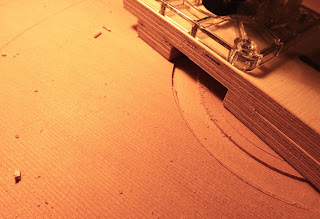 A similar setup serves to adjust my laminate trimmer.  You can see that I set the cut about a millimeter away from the knife line. Depending on grain direction, in some places the residual material gets blown off by the force of the router. The stuff that remains is easy to pare away with a chisel. 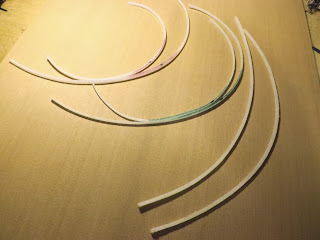 I've followed Eugene Clark's method for rosette construction for some time, including the use of waxed spacer lines to take the place of border and tile elements.  That makes for a lot of work -cutting an extra 20 veneer strips, waxing each one, etc., and they're not reusable!  I thought I'd try some of this UHMW (Ultra High Molecular Weight) plastic sold through various woodworking suppliers as jig-making material for table saw miter tracks.  It's durable and glue does not stick to it at all.  I ripped pairs on the band saw in increments of 2, 2.5, and 3mm, color coding them and trimming them to length to fit into the rosette channel. 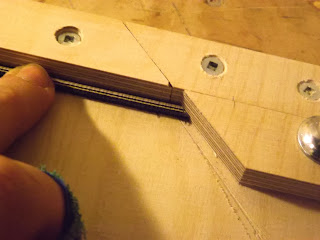 Border material is cut on an angle in a tiny little miter box sized to fit my fine backsaw. 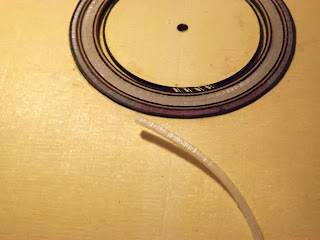 The plastic strips pop right out, and the tiny little pieces are glued in the resultant channel.

I've decided to keep things simple and bold.  I've been looking at a lot of rosettes recently, and coming to some conclusions.  I think I'm most attracted to the early Spanish designs which rely more on geometric patterns than pictorial representation. In the one on the left, in fir, I made the border quite large.  It seems to me that there are two trends in modern classical rosettes - one being the use of spalted or other highly figured woods as a focal point, the other being extremely detailed mosaics.  To my eye, they seem out of proportion to the instrument as a whole and get completely lost unless you happen to be right up next to them. A position neither the player or the audience is likely to find themselves in.  Though I'm fond of spalted wood, I'm not eager to jump on that bandwagon.

There's a quality of mechanized precision to most of the commercially available rosettes that I think is at odds with a handmade aesthetic.  I like the little irregularities this process imparts. They're not jarring, but they do add a floating quality, and visual movement.  It takes quite a while to make one of these things, but there's a kind of novelty to the process.  It's contemplative. In the example on the right in red cedar, I decreased the size of the border and flip-flopped the border tile (made from the exact same veneer lamination), and it creates a significant contrast. I thought the larger field of pearwood might echo the color of the cedar in a pleasant way. 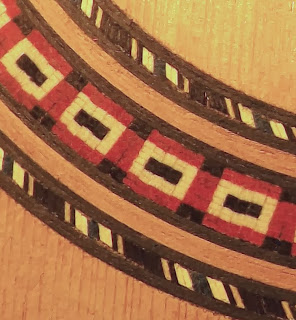 (These photos were taken after scraping the surface level, but prior to sanding or the addition of finish.)

Posted by Ted Woodford at 12:01 AM No comments:


For the last couple of weeks I've been busy preparing a small storefront to act as an office/meeting place to establish a more visible profile in the Hamilton music community. Recently, we were able to find a place in a nursing home for my mother and I've regained some freedom to pursue my creative endeavors.

Currently, I have classical and flamenco guitars on the go, and I'll document them when they're closer to completion.  I realized recently that I have very few photos of finished instruments on here. I hope to redesign woodfordinstruments.com and turn it into a profile and presentation page which will maintain a link to this blog.  If you have this page bookmarked, you might be redirected.

It's a busy time.  I apologize if I haven't responded to your comments recently -I haven't been checking in with much regularity.  You can always reach me via email: ted@woodfordinstruments.com.
Posted by Ted Woodford at 11:37 AM No comments: