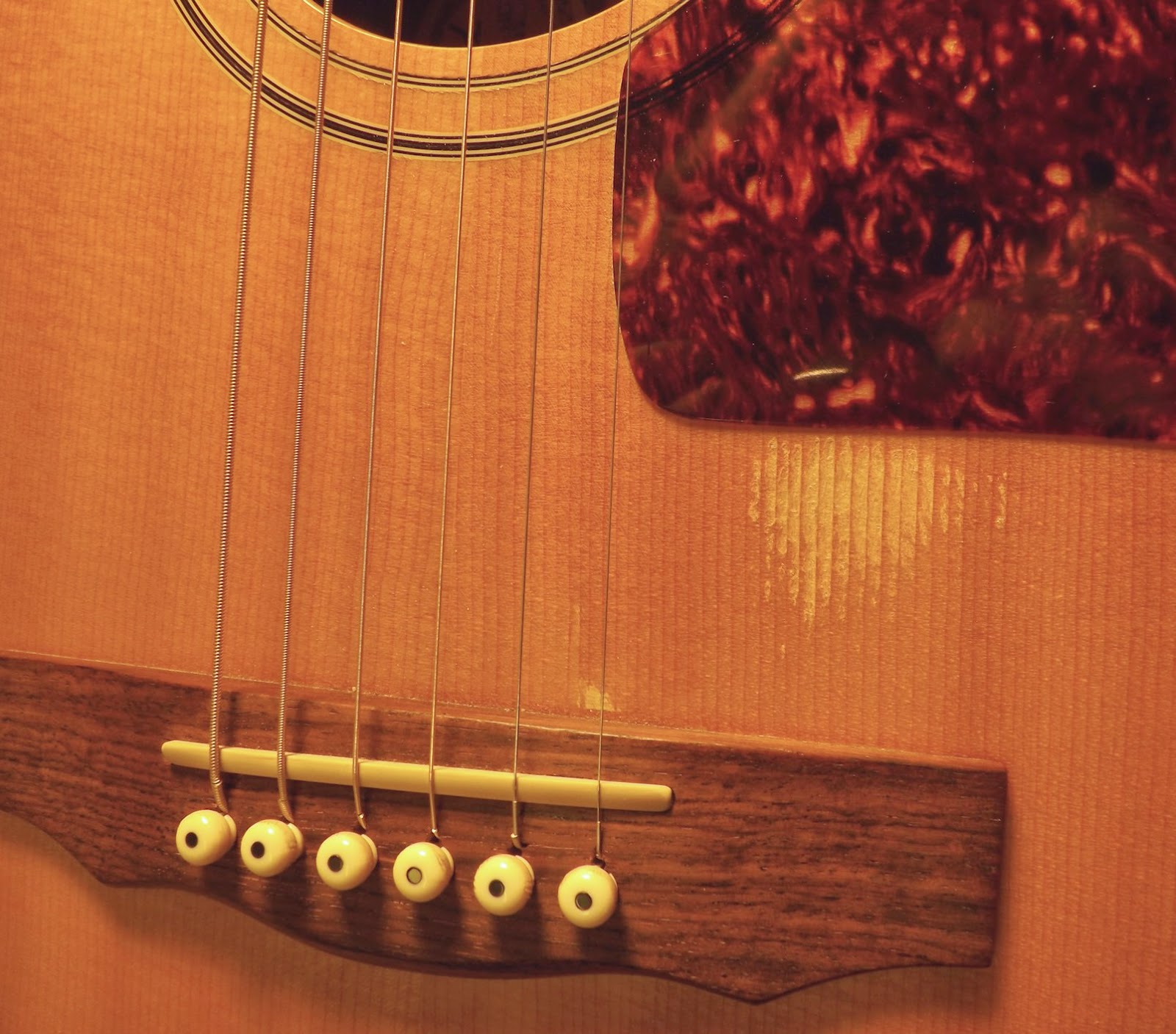 Here's a late-'90's Guild F47 that came in for some finish work recently.  It's got some localized pick wear. 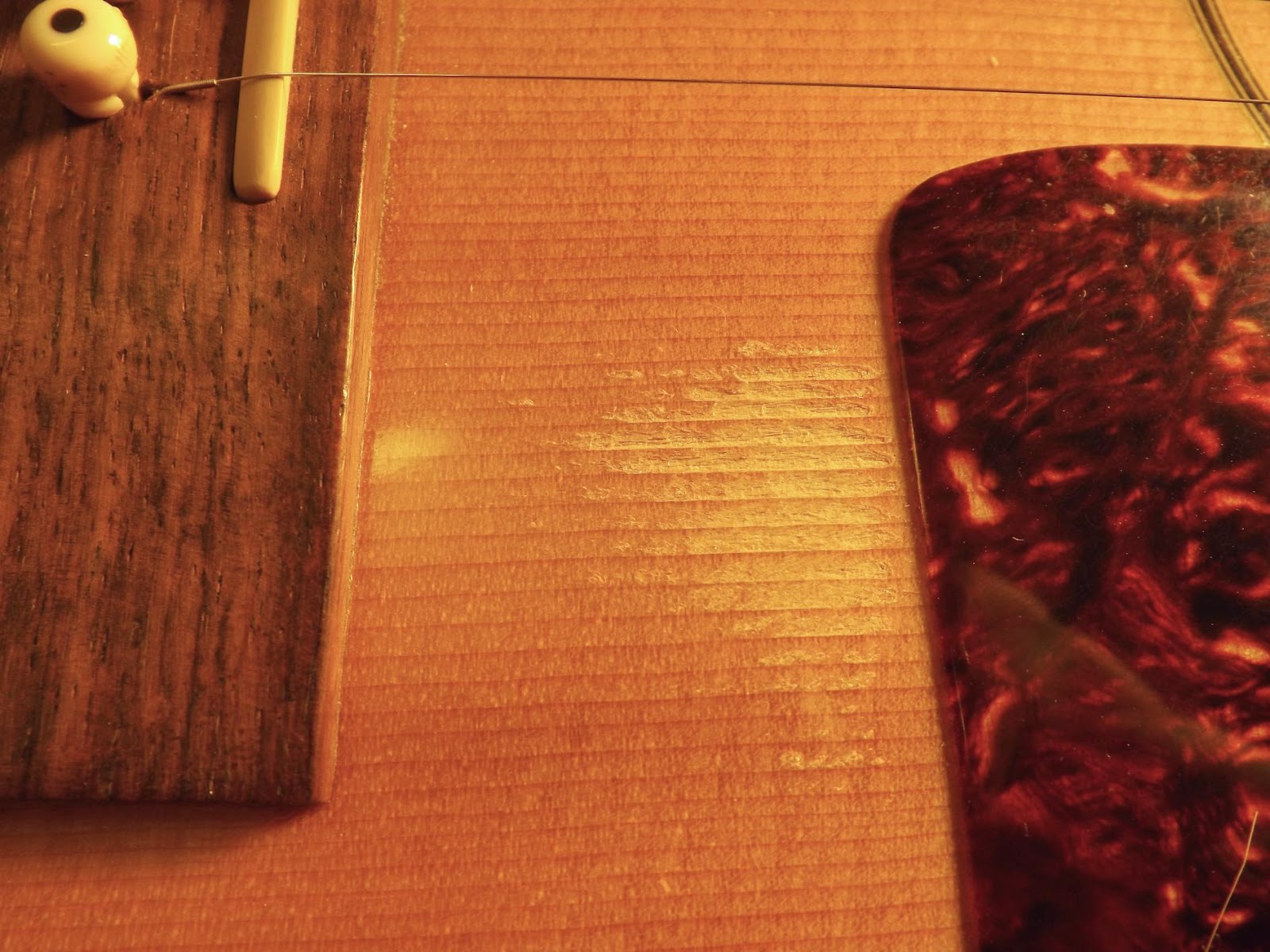 Pretty vigorous strumming!  It extends into the spruce, and it's worn deeper in the soft summer growth, leaving the harder winter lines standing proud.  What's nice is that the abraded surface is fairly fresh and clean looking. 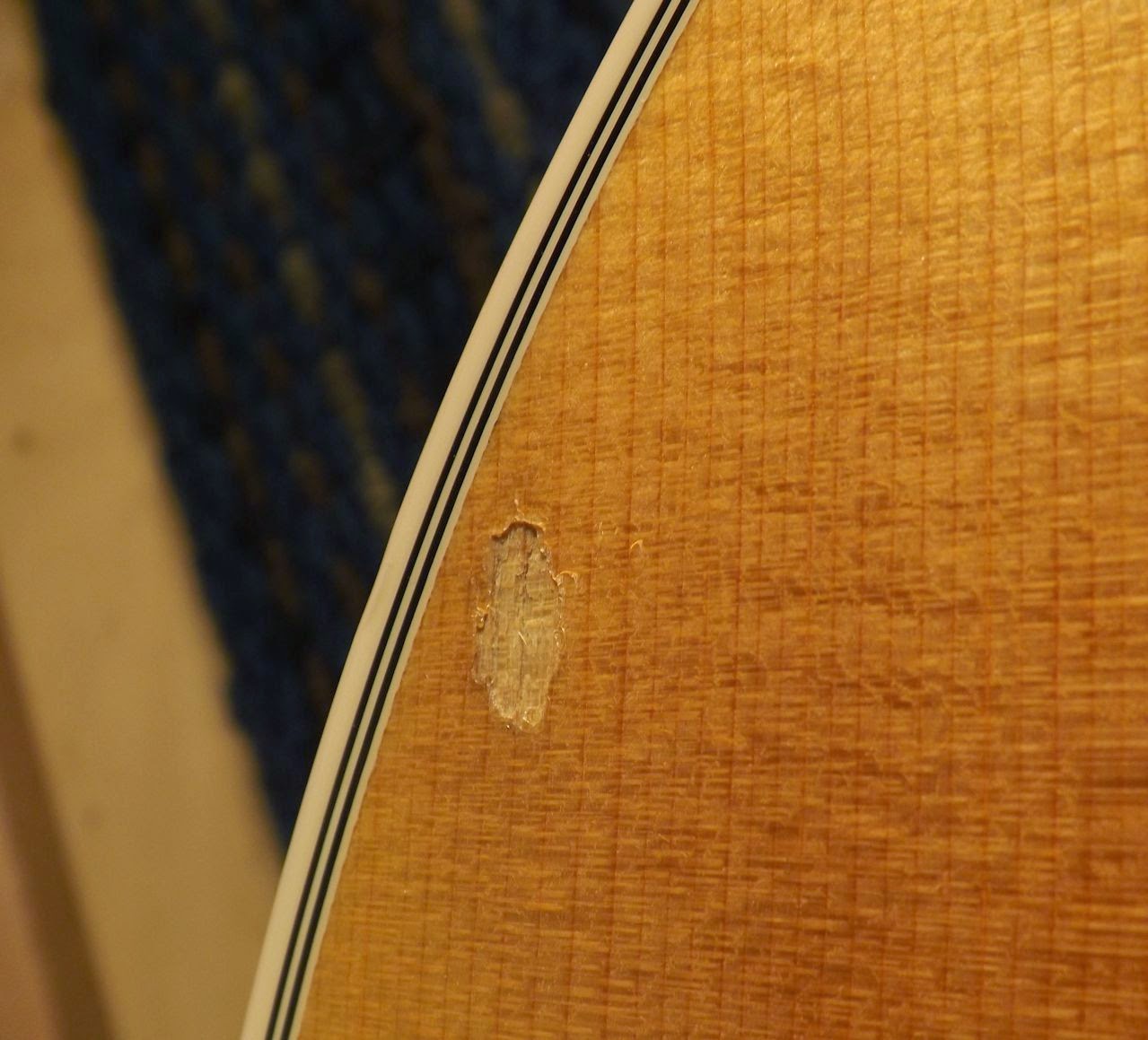 This is a chip on the lower bout.  This seems to be nitrocellulose lacquer, and it's very thin for a production model guitar. (That's not a bad thing). You can't see it well in these photos, but the entire surface has that sunken washboard effect one finds in nitro that has been buffed soon after spraying. This chip has been exposed to the elements for much longer and the spruce has oxidized quite a bit. 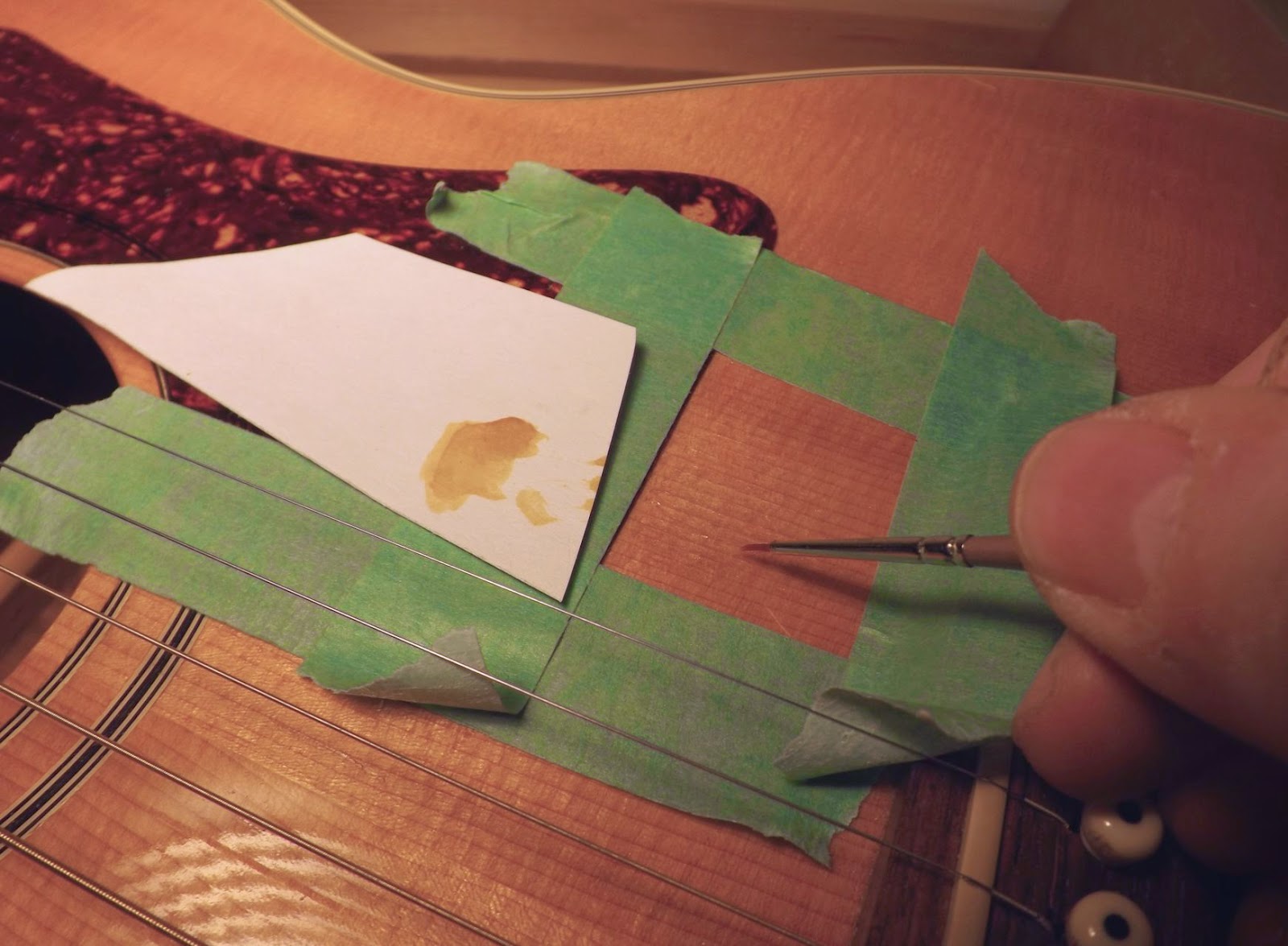 It's a multistage process.   I start with a thin coat of cyanoacrylate to seal the wood surface, followed by light washes of dewaxed shellac tinted with dye in an effort to match the darkened lacquer.  This is a guessing game. The tendency is to go too dark, and one has to remember that the new lacquer is going to age and darken as well.  In the end, I'm happy to subdue the raw white of the abrasion.
Next comes another layer of cyanoacrylate, and finally several coats of lacquer, sanded and leveled prior to hand-rubbing with polishing compound. The lacquer keeps sinking into the canyons between growth lines! 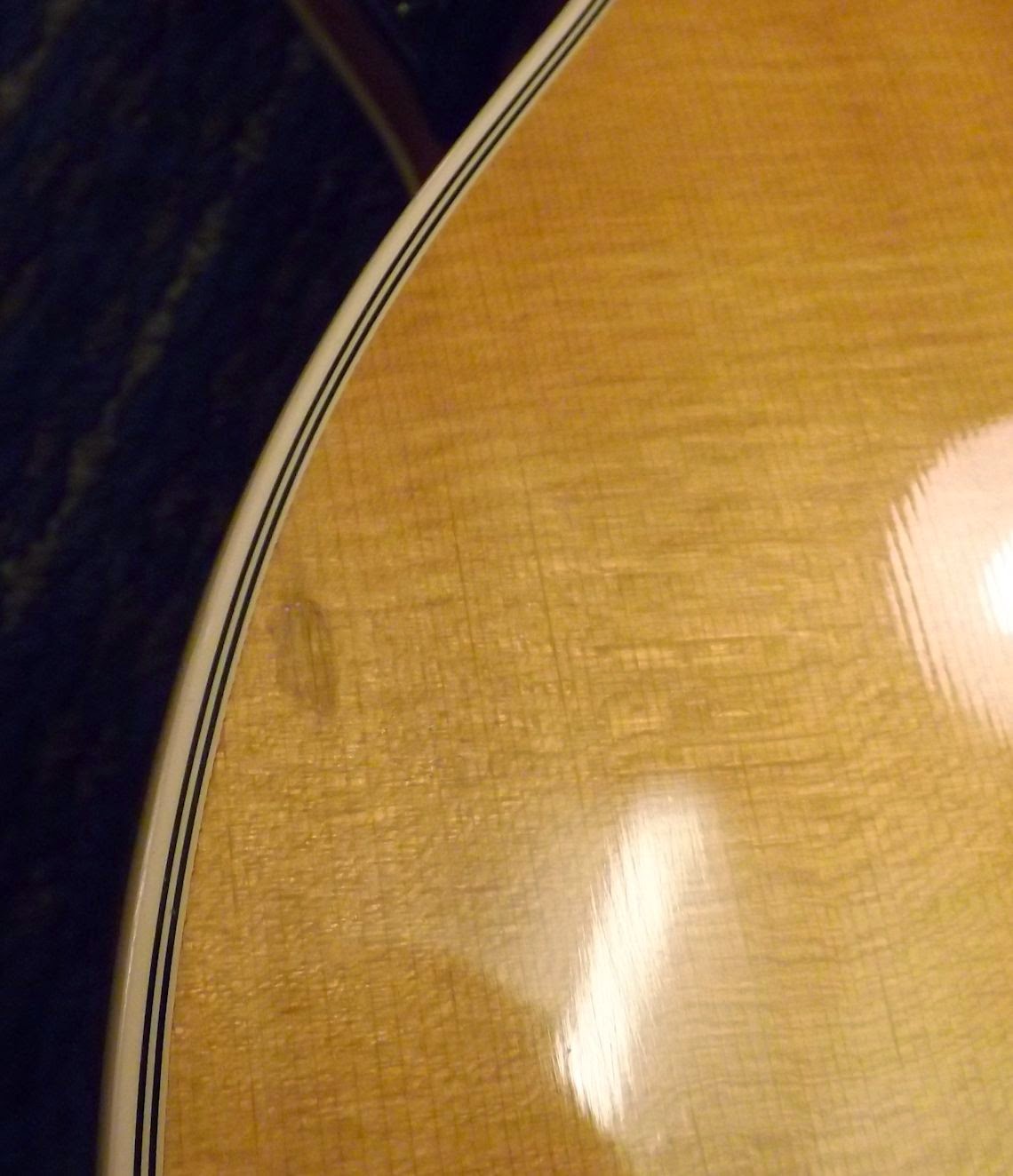 I didn't use any color on the chip, because I had a hunch about the surface oxidation. The longer it's exposed to air the darker it gets.  Have a look at the joists in a the attic of a fifty year old house and marvel at the complex chemical reaction! After a century they're like dark chocolate.   At least this appears cared-for, and it's not prone to further flaking. 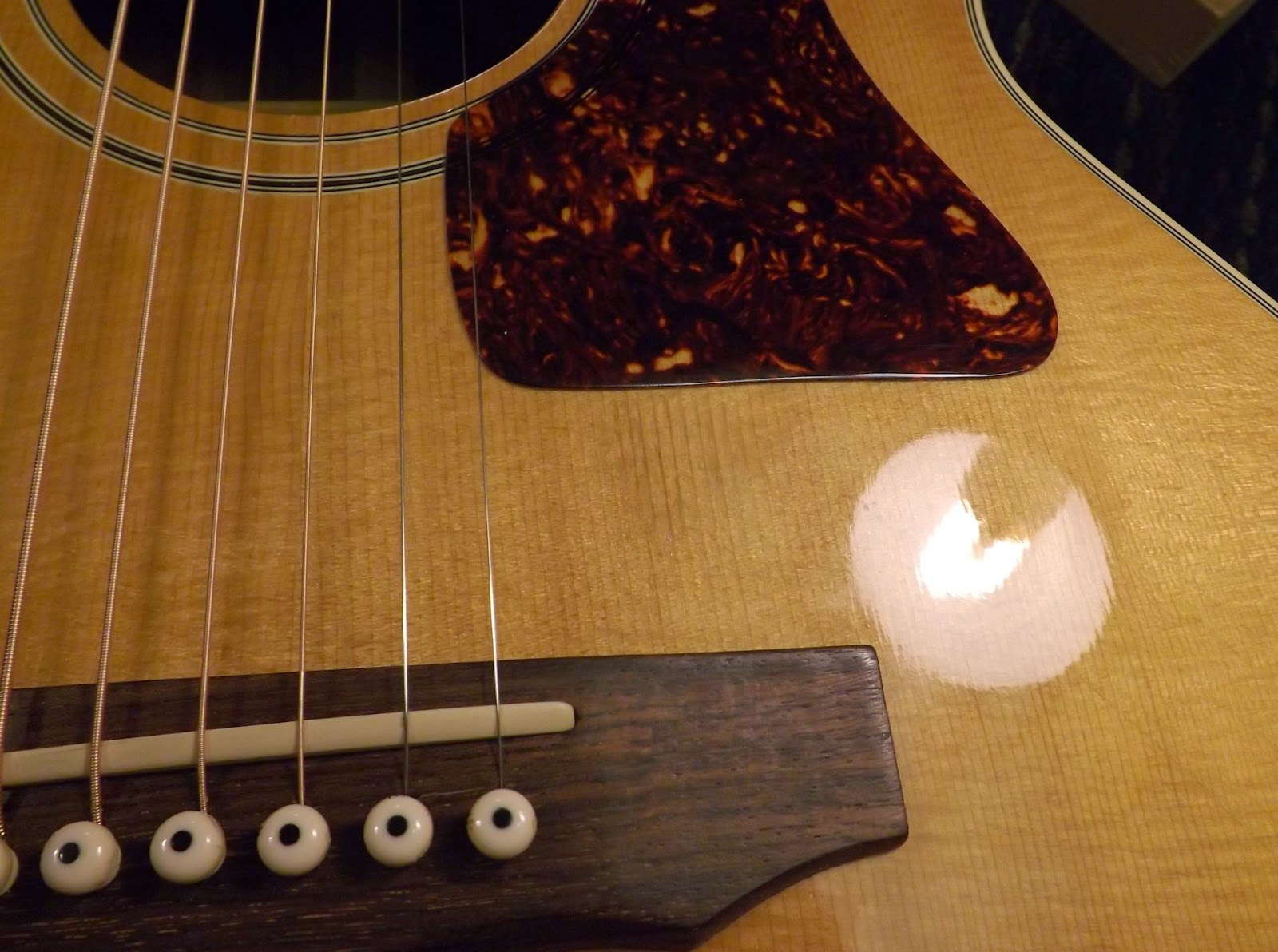 The area next to the bridge fared better.  The lesson being: if your guitar gets a scrape it's easier to disguise if it's tended to sooner rather than later.
Posted by Ted Woodford at 7:44 PM No comments: