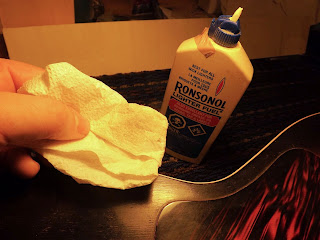 What should I clean my guitar with?    I usually suggest one of the proprietary cleaning polishes available at any music store. (Never use furniture polishes like Pledge which contain silicone. Silicone is bad news.)  For the relics coated in goo, naptha lighter fluid is the best choice and use only Ronsonol brand, if for no other reason than it was the one employed by Jimi when he burned his Strat at Monterey Pop. 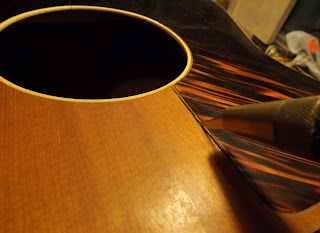 The pickguard crack needs to be bulldozed clean. Using a scalpel blade upside-down, I pull out any dust and also gently compress the sides of the crack so it's slightly V-shaped in section. The spline will also be shaped to a taper. When moisture is absorbed from the glue  it will expand and lock things tightly in place.  For spline material I split pieces from an old viola soundboard. 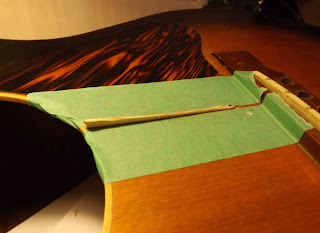 I carefully apply paste wax with a cotton swab up the the edges of the crack and then tape it off using low-tack painting tape. Hide glue is worked in and the spline is quickly inserted. I use the back of my carving knife to press it firmly in place.  Here, I'm just beginning to pare away the excess. When I near the surface of the guitar I switch to a razor blade used as a scraper. 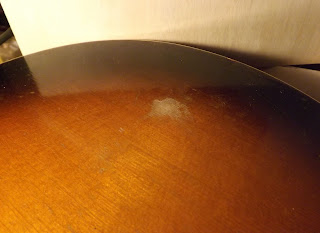 A little bit of touch-up work is necessary on the surface where one's arm contacts the face. The owner wishes to seal off this area to prevent sweat infiltration. I'll use a tiny paintbrush and some shellac tinted with alcohol-soluble dye. It took a few tries to come up with the right density of color. 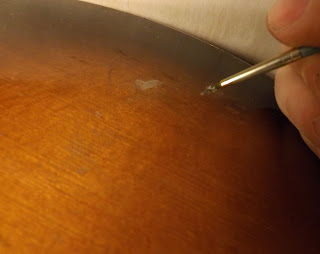 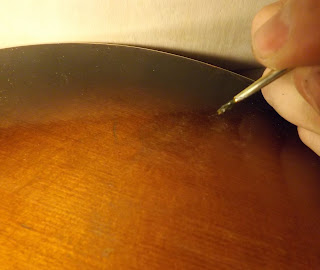 That's better than it was.
To reglue the loose section of pick guard I decided to use inexpensive white glue.  Usually maligned in the luthiery community because of it's propensity to "creep" under load, that property seemed advantageous in this instance. 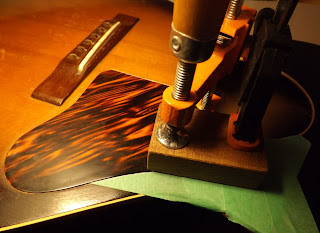 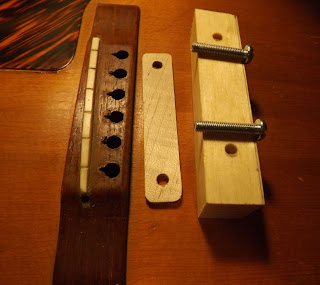 Here's the setup for gluing on the bridge-patch overlay.  A piece of hard maple is cut and planed to about 2mm thick. I don't want to make it any larger than it needs to be. You can see in the photo that the grain runs out at an angle and I feel this is important.  Recall the torn fibers from the photo in the last blog entry?  At first glance it looked as though the patch had split clean through in line with the grain. As it turns out, the blowout from the exiting drill bit tore those fibers at the time the pin holes were drilled!  Using a patch with the grain at an angle can prevent that to some extent, as will using a block to back up the drilling.

The patch will be kept in position using two #10-32 machine screws which go through the sacrificial block and patch, both pre-bored to the correct placement of the outermost pin holes. That block is heavily waxed, as are the screws. The screws aren't long enough to interfere with a clamping caul placed on the top surface of the bridge. 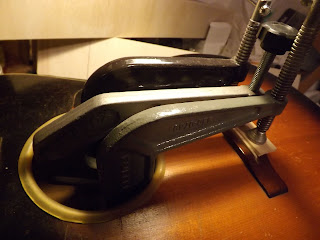 All clamped. Normally I would remove the saddle but there was enough bearing surface. The saddle may have been glued in place. We'll have to see what happens during set-up. Luckily there is plenty of exposed bone.  Pro-tip : snip a length of surgical tubing down one side and the soundhole periphery will remain free from clamp damage!


Posted by Ted Woodford at 8:01 PM No comments: 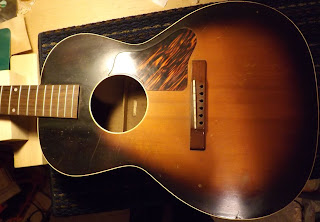 Here's an interesting guitar ready for some care and attention.  The headstock bears the name of Carson J. Robison, a cowboy crooner who got his start working as a whistler on WDAF in Kansas City, in the mid-1920's. That's right. The man was a professional whistler...

He later appeared on The Grand Ol' Opry and penned the lyrics to Barnacle Bill the Sailor and was inducted into the Nashville Songwriter's Hall of Fame.  In the 30's he also gave his endorsement to a line of guitars sold through the Montgomery Ward catalog.  As it happens, they were produced by the Gibson guitar company. Gibson made a number of low[-cost models during the depression, most prominently under the Kalamazoo badge.  This instrument is essentially a budget L-00, being 14-5/8"  across the lower bout. 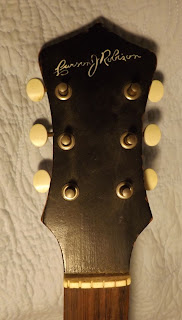 Gibson dispensed with the expensive and time-consuming truss rod.  The neck is a pleasing hard-V shape and it's in good shape. The head shape and markings tell us this instrument is from 1936. 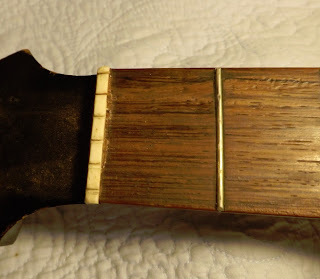 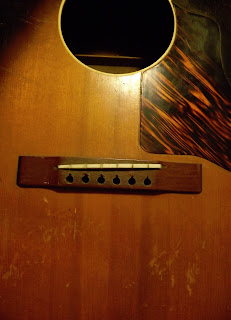 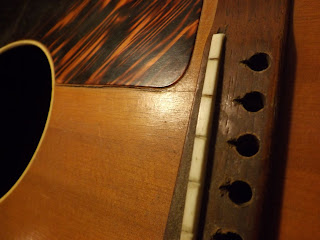 Here's the issue.  The pickguard has shrunk a little, being cellulose. It's pulled a crack into the top between soundhole and bridge. The owner and I discussed removing the pickguard and regluing it. In the end I deemed it unnecessary. This guard is very thin, and it hasn't created a serious deformation in the top surface. By luck a portion came unstuck on the side opposite the crack, thereby relieving much of the stress. This guard was adhered to the bare wood prior to finishing, and that gorgeous sunburst was sprayed right over it. We can re-adhere the loose portion and maintain the originality. 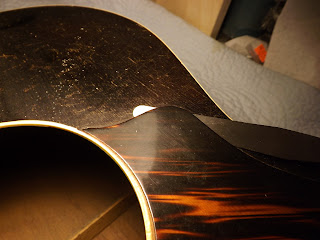 So, where did Gibson skimp?  They saved 25 cents on the truss rod, and another nickel on the back binding. The bracing is stout and simple, transverse bars above and below the sound hole, and two bars that run fore and aft of the bridge. Decent mahogany was used throughout. The application of glue on the interior was not particularly fastidious. The side depth is quite generous, tapering from 3-9/16" at the heel to about 4-7/16" at the tail.  I can't wait to hear how this thing sounds. 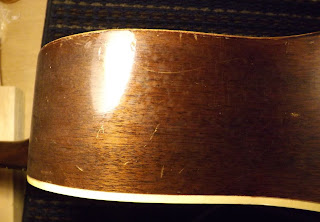 The other piece of structural work to be undertaken lies inside. The ball-ends of the strings have eaten through a portion of the bridge patch and I'll make a small overlay. Isn't it amazing that after 70-odd years the fuzzies from drilling for the pin holes still remain? 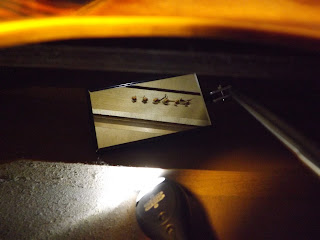