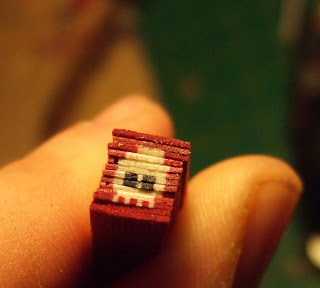 Scraping is finished when the ends of each line appear square and the pattern looks okay. To ensure accuracy it works best to cut the rows into short lengths about 6" (150mm) long. These are easier to press together and the pattern stays more regular. I'll now repeat the gluing operation to make a little block from which I will saw tiles about 2mm (0.085") thick. 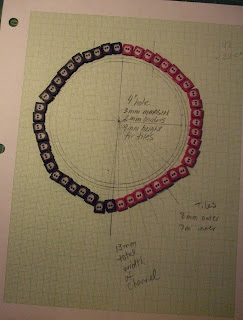 I made a rudimentary diagram showing the dimensions of the soundhole and the channel I'll need to rout for the inlay. This rosette will be about 5/8" wide, which will make for a dramatic statement. I decided to make it two-toned, black and red for visual interest. Each tile displays its own little variations. They definitely don't look machine made, and I like that. Why go to all the time and trouble to make this kind of thing when mass produced ones are available and cheap? I guess there are just some things we have to do that defy rational thinking and economics. Things that make life interesting. 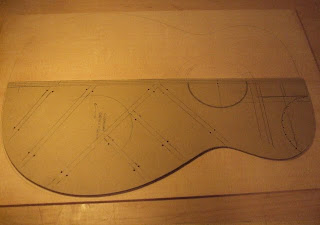 Here's my template. This instrument will be similar in size to a Martin OM, just over 15" wide at the lower bout. I've chosen to include a Florentine style cutaway and that means I'll make some slight changes to some dimensions to make up for the loss of interior air volume this creates. I'll increase the body depth by 3/16" (4mm). I aim for a balanced output that couples power with lots of tone color.
The Sitka spruce top is one I got from David Freeman at Timeless Instruments. It has lots of character, with patches of bearclaw figuring. It's nice and stiff and even at this early stage it produces a complex set of sounds when I tap on it.
The template is 1/8" (3mm) hardboard and I've drilled positioning holes to poke a pencil through to mark brace locations and the cutaway. It's also wider than necessary to allow me to vary the width of the instrument by as much as 1/2". 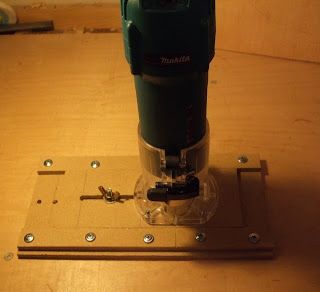 My wife jokingly describes much of my working practice as, "getting jiggy with it". Now, -I actually use more hand tools and less machinery that a good many luthiers, but it's true. Guitar makers spend an inordinate number of hours creating devices designed to save a few minutes. Here's a $3 router compass made up from some hardboard, a wing nut and a dowel. 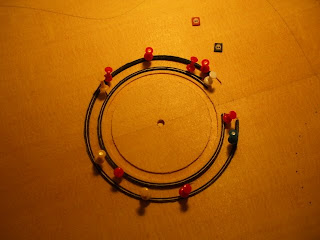 I hand planed the top just enough to clean up the surface. No matter how careful one attempts to be, it's easy to put scratches in with the router compass and inlay procedure. Also, the large volume of glue involved can cause the top to expand if it's too thin. To prevent any misalignment I went ahead and partially routed the soundhole. If I left it until afterwards, it's likely that the rosette would appear oval. Rout them at the same time and everything expands and contracts together. I didn't cut all the way through because I'll be hand planing the top to final thickness from the other side, and it's just easier if the hole isn't in the way.
The bordering lines are individual strips of veneer, 5 strips on each side. BBWBB The black strips are actually the result of a dying experiment gone slightly wrong. I didn't get complete penetration to the core so when they're planed down I end up with a complex grayish-black variegated appearance. The first time I used them I cursed, looked again and realized I really liked the effect!
Here's a little tip - by having the strips as individual lines rather than prelaminated, and not gluing them in place (they're dry at this stage, just held lightly in place with the pins), I've found I get a much tighter finished product. After the tiles are in place I'll wet the whole thing down really well with thinned glue. It seeps into the cracks, the lines all expand and everything sort of melts together. 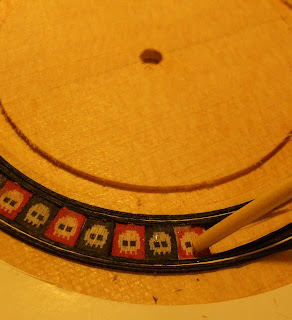 The tiles as they are cut from the block are close to square in cross section. A slight angle is necessary to keep the pattern centered and prevent gaps. It's not necessary to belabor this! Just grab a wide chisel and do it by eye. Again, the slight variety is what makes the whole thing come alive! The regularity of machine precision ends up being visually static. Having the slight irregularity in the spacing and angle gives the characters a certain optical illusion. They seem to be moving across the colored background in a kind of dance.
I put a dab of glue on the bottom of the channel, and on the side of the adjoining tile before nestling things in place with the end of my brush. Any little spaces will magically disappear when the glue expands the veneer. 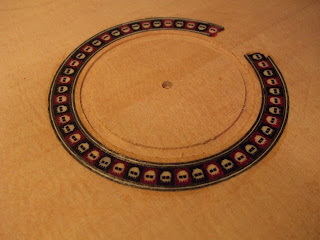 After brushing on a really thick coat of thinned glue (still using the yellow aliphatic), I let it dry thoroughly before planing things level. There's one little spot there on the treble side where the white line split and flaked off below the surface. I've been using some dyed white maple, but it's got some figure in it and tends to be a bit chippy. No problem. I'll just scarf in a little patch and it'll be invisible. The entire surface gets coated with thin superglue to seal off all that end grain even further and make it less likely to absorb dust or dirt in the interim before I apply the finish. 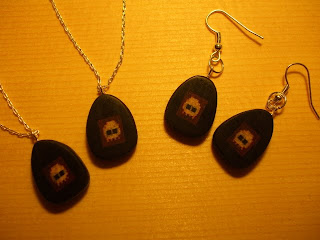 What does one do with the inevitable leftover tiles? You can pair them up with the scraps of ebony that every luthier can't bear to throw away. They make good tags to put on the key chains for a lockable guitar case. Or you could make jewellery for rebellious youth. A little time with the sandpaper and I came up with these vaguely plectrum-shaped forms.

Posted by Ted Woodford at 7:58 PM No comments: 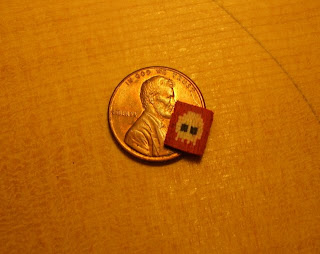 I've started work on a new instrument this week, a midsized steel string. I intend to follow the construction closely with frequent blog updates!

Here I'll describe my process for making the traditional Spanish-style mosaic inlay used to decorate the soundhole perimeter on classic style guitars. I've scaled the size down a little to be more in keeping with the steel string aesthetic.

I credit this entire process to master luthier Eugene Clark, who's method was detailed wonderfully in the Journal of American Luthiers, issues 71 and 73. 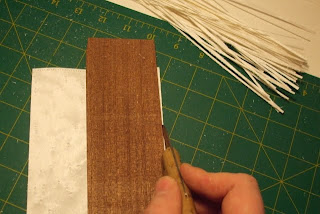 My rosettes are constructed from strips of veneer (0.5 mm/.025" thick). Some of these I buy in sheets ready dyed, others I color myself using aniline stains cooked in a big pot on the stove, not unlike spaghetti, but even more al dente'.

I've devised some interesting jigs to cut the strips. In the end I came to the conclusion that by just making little pencil marks and going at it with a wooden straightedge and sharp knife, my eye quickly becomes adjusted to gauging the size. It's much quicker and accurate enough. They end up about 2mm wide, a convenient size to work with. Eventually they'll be scraped square in cross section. 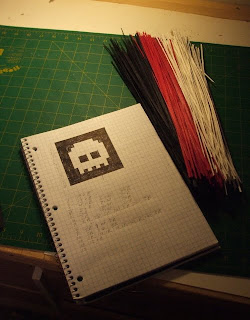 Traditional steel string instruments often have designs made up of concentric lines- a quick and easily accomplished solution for the factory. Early Spanish luthiers often employed geometric or floral patterns. Eugene Clark associates the design process with weaving and textile arts. To me, it feels more akin to the Italian art of Millefiori glass.

The pattern options are boundless! As individual craftspeople we have the opportunity to be a little more personal with the motif. I'm using this little character here, a skull figure that in this format has a definite old-school Space Invaders aspect. (Yes, I know there's no nasal hole! Don't ask me why - that's just the way it is!)

I plotted the design out on graph paper and transcribed the squares of color into a sequence to assemble the lines into individual rows. 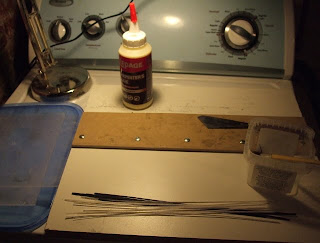 Having a big sink nearby is important. It's a messy business. The top of the washing machine becomes a ready made workbench! I'll be using yellow carpenter's glue as an adhesive. The laminate workboard has a piece of hardboard screwed down to make a straight fence to press against. It's hard to see, but the edge has been covered with clear packing tape to provide waterproofing. 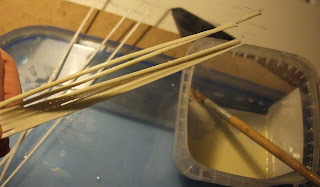 I'm not stingy with the glue. It's important to get every strip thoroughly saturated. The glue has been thinned with a small quantity of water to extend the working time. I cover five or six strips at once and line them up. They are then squeezed lightly between thumb and fingers and excess glue wiped off before adding more lines to complete one row of the pattern. 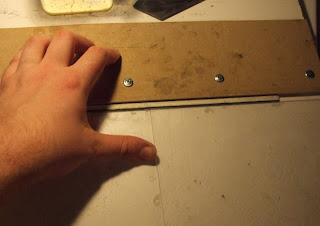 A couple of thin Plexiglas sheets provide a light, even pressure to hold the now assembled row straight against the fence. The surface of the workboard and fence has been slightly dampened to prevent the row from sticking too firmly, but also to provide a little surface tension to hold the plexiglas down flat on the board. The five minute interval required will allow the glue to seize up before I run a pallette knife around the row to free it. The next row goes in, and the previous row gets set aside to dry. 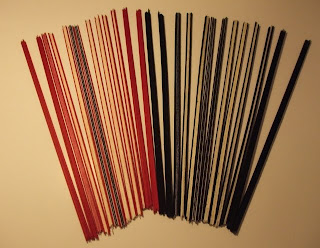 The rows have now been readied. These are about 12", (300mm) long. This length is easy to work with and cuts down on the incidence of breakage during the thicknessing process. 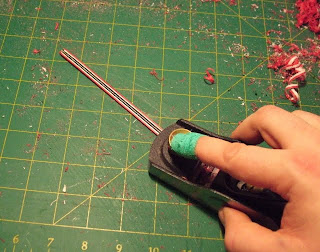 Rough thicknessing proceeds with a block plane. I hold the rear end of the row in my hand - there's no safe means of butting the row against a stop block as it's too thin and would bend or break. 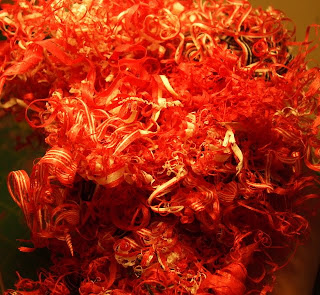 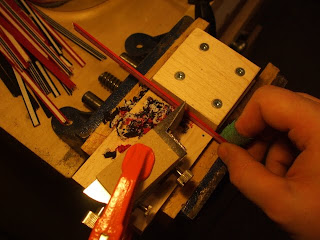 This is an old #90 Stanley shoulder plane in bullnose con-figuration clamped to a maple block at close to 90 degrees. The rows are slipped between the blade and fence at a point about 1/3rd their length and pulled (carefully) toward me. I then reverse the strip to scrape the other end. As I started with veneer 0.025" thick, that should be the final thickness of these strips to ensure the ends will as tiny squares in the finished product. Work progresses by advancing the blade in very small increments, flipping and rotating occasionally to ensure even stock removal, and eventually things get done. It takes some time, but it's a good opportunity to reacquaint ones'self with an old album, in this case it was Muddy Waters' "More real Folk Blues".


Posted by Ted Woodford at 4:28 PM No comments: