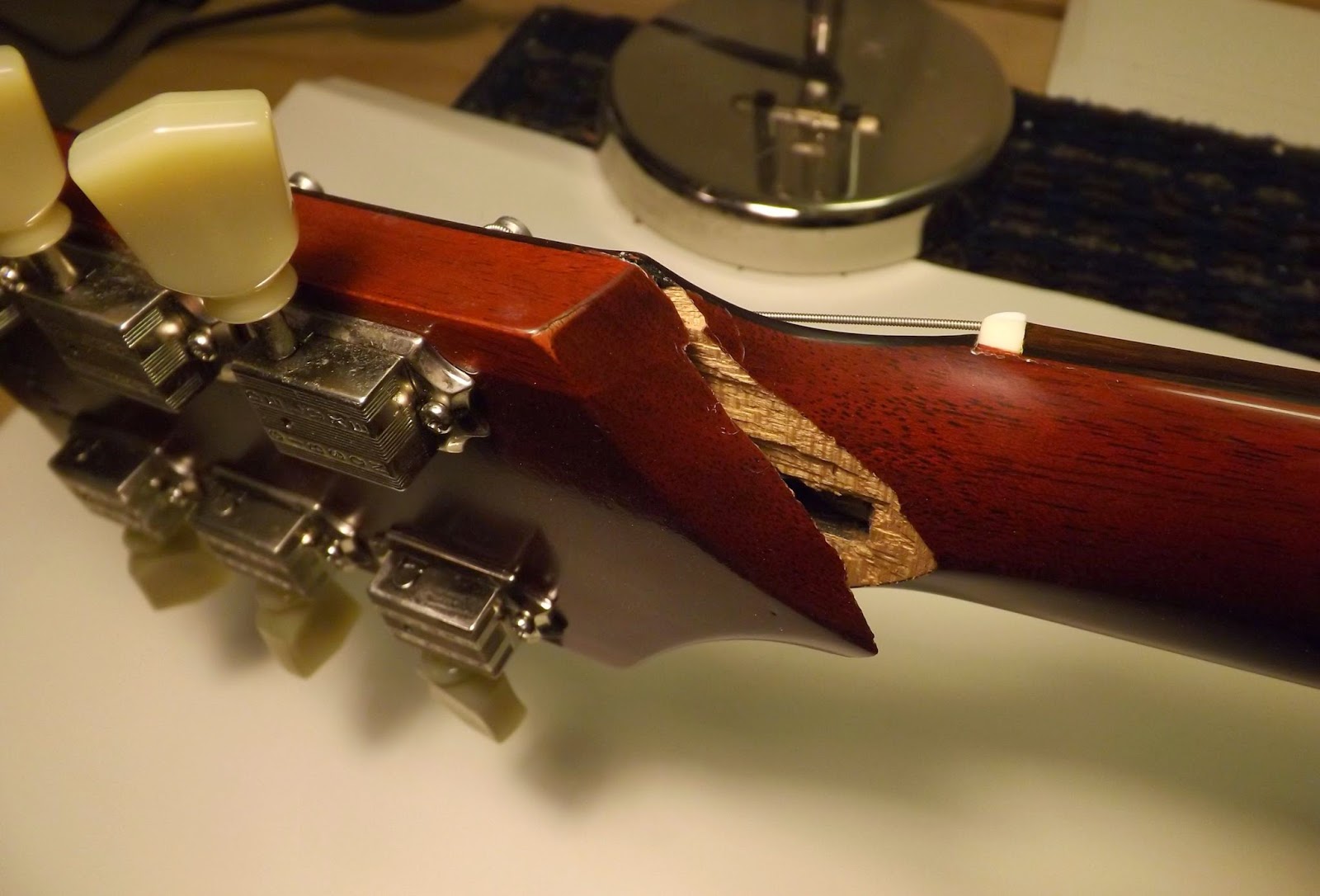 This is a Gibson ES-335 which is feeling a little under the weather.  Some time ago it suffered the classic Gibson headstock fracture, presumably when it hit the floor.  It was dealt with by the repair department of a well-known music shop and unfortunately the repair didn't hold. 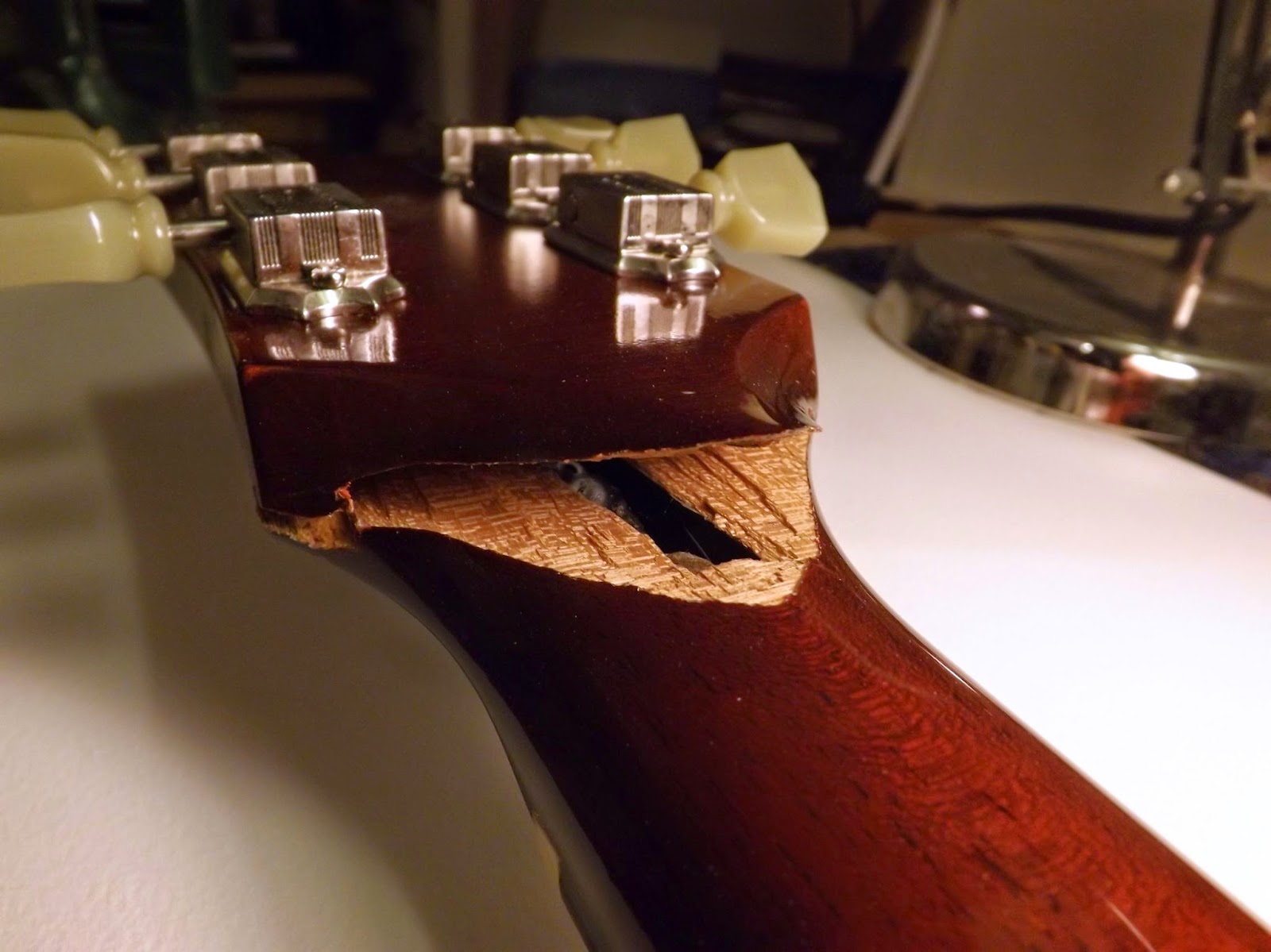 Why?  There's a lot of surface area and all things considered it was a clean break.  It's very difficult to tell from the photos, but I suspect the joint was clamped tightly together and thin viscosity super glue was wicked into it.  This probably wasn't the best choice of adhesive. Cyanoacrylate glues are very brittle and don't have great shock resistance. Hide glue is also brittle but it also has much greater cohesive strength.   I now have to deal with a joint that has its mating surfaces sealed with plastic.  Epoxy seemed the safest choice. 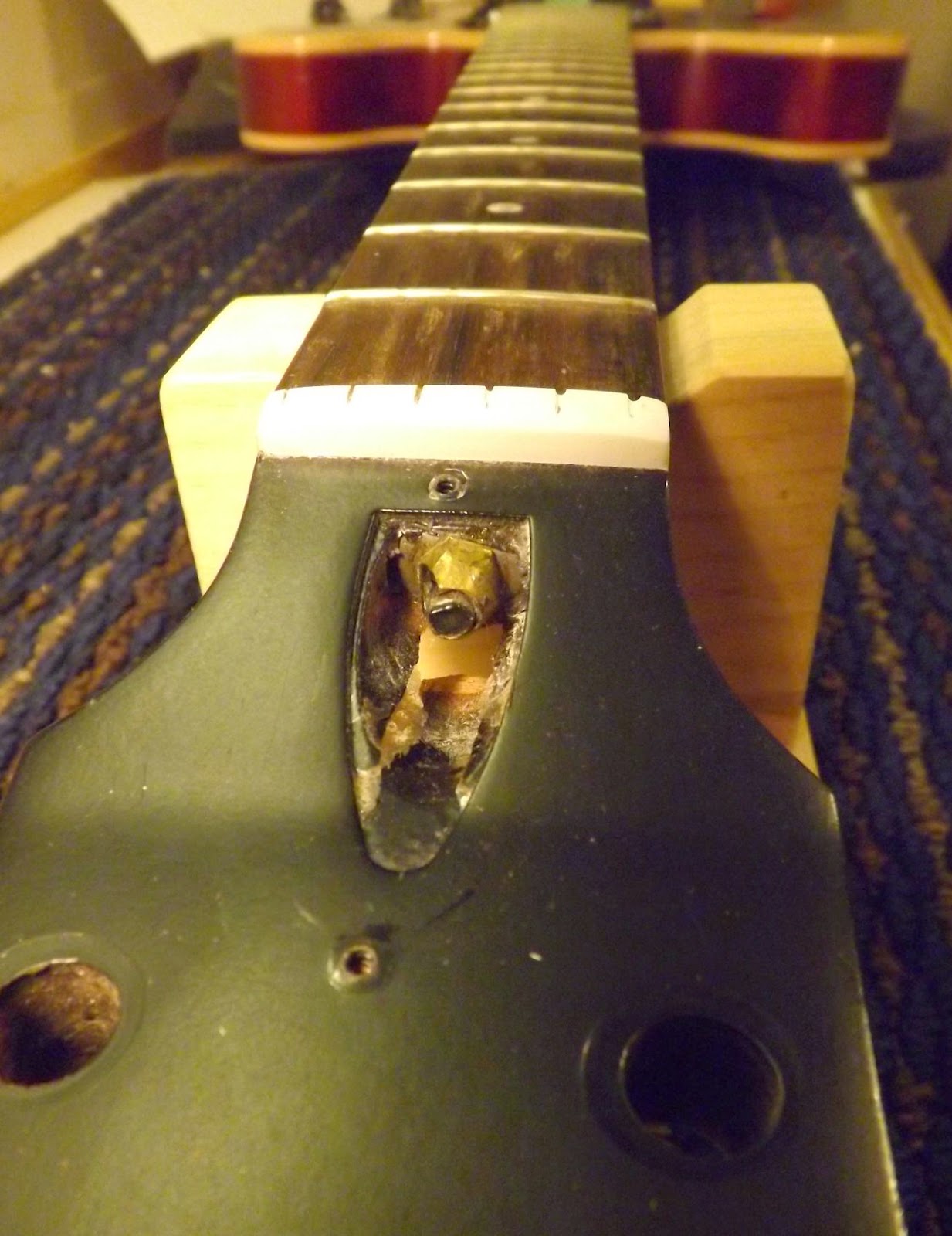 The black fiber headstock facing was kind enough to bend rather than break and hold things together. The fracture runs right through the truss rod cavity, and I was sure to back the nut off and lubricate it well before applying glue.  I also used some tape in there to try and keep infiltration at bay. 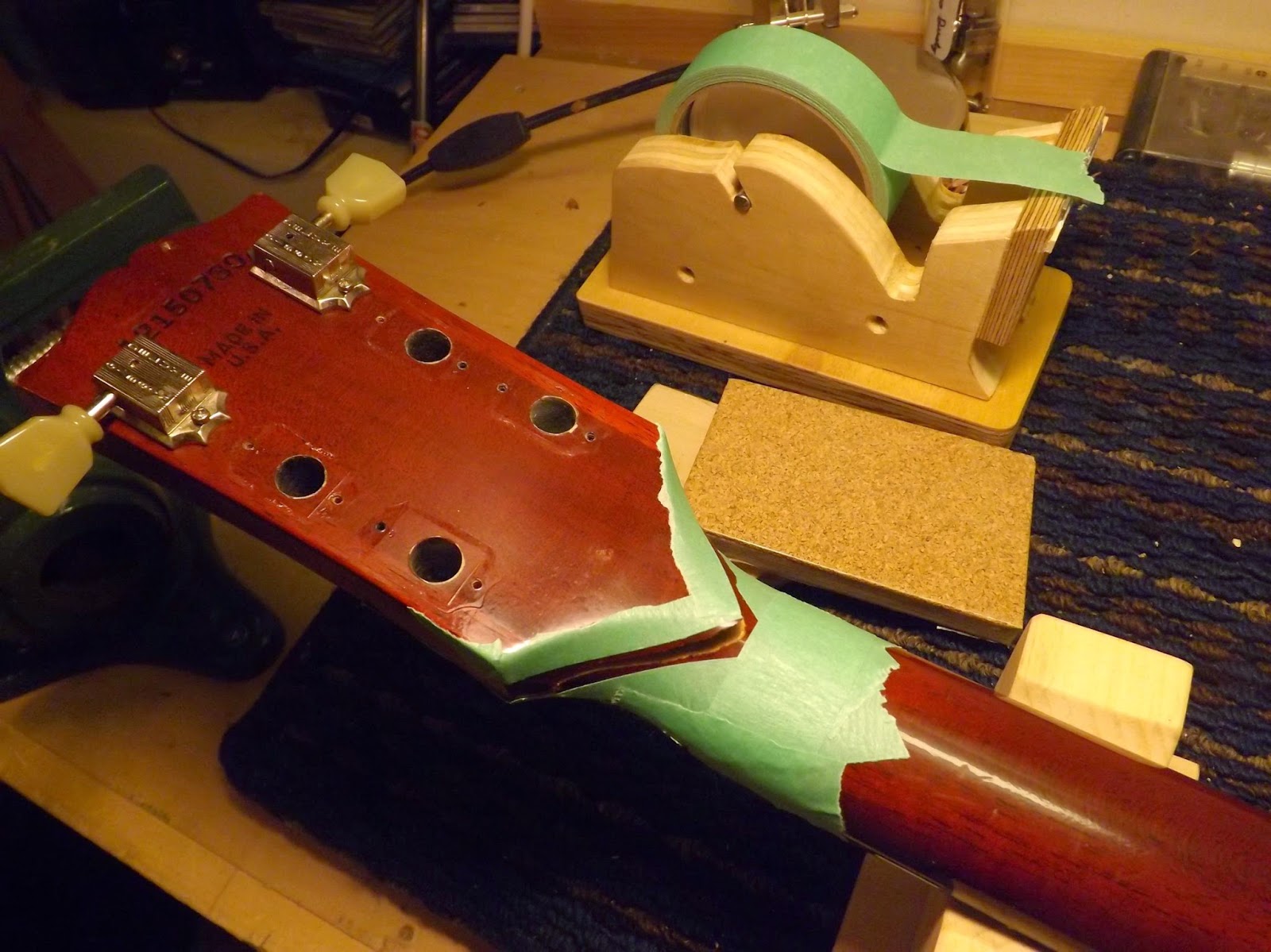 I used a high-quality epoxy with a relatively low viscosity, so I had to mask things off carefully. 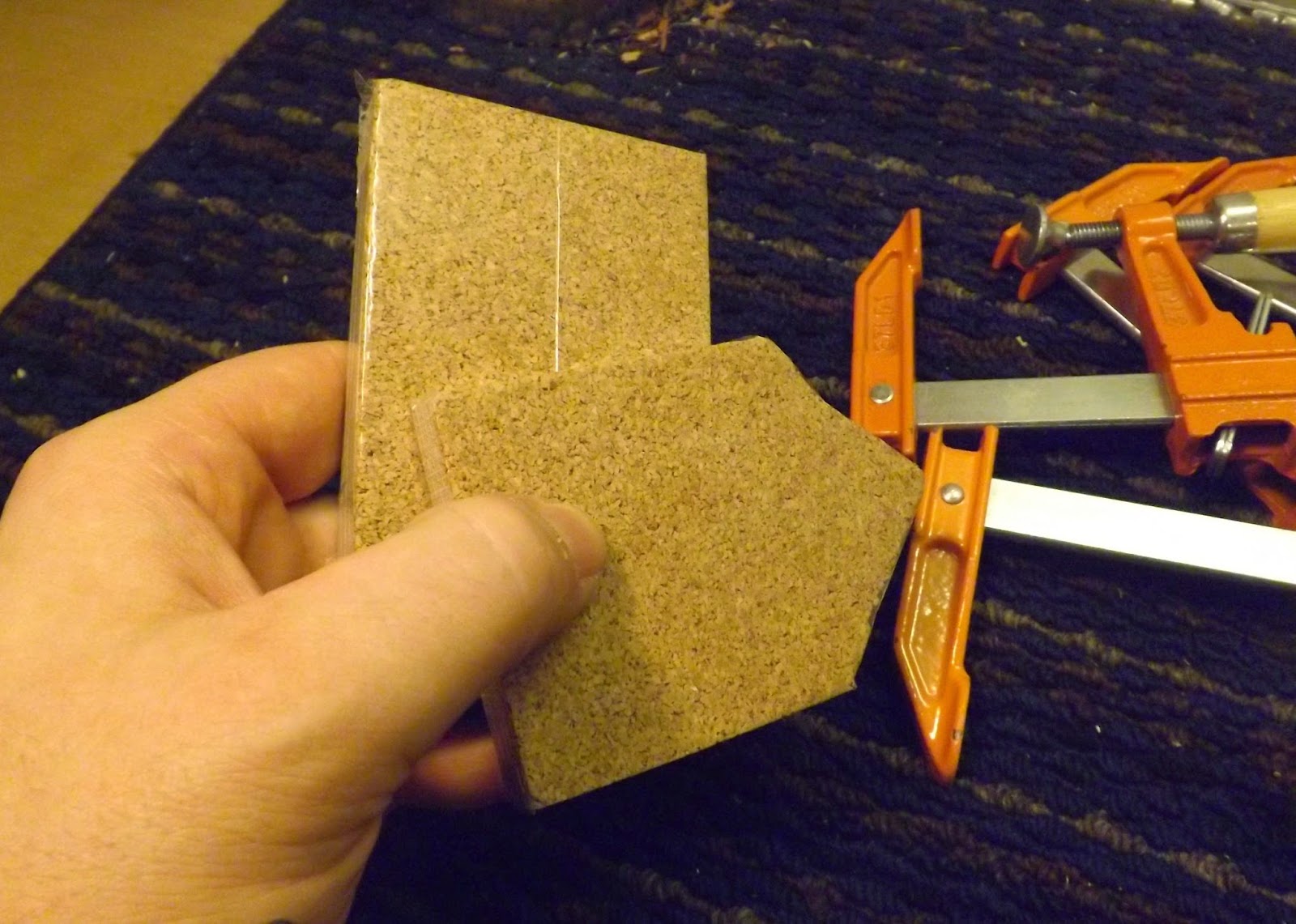 Clamping cauls are padded with cork and protected with packing tape. This is important because enough pressure is applied to dent the surface of lacquer! The previous repair guy left a divot right behind the first fret... 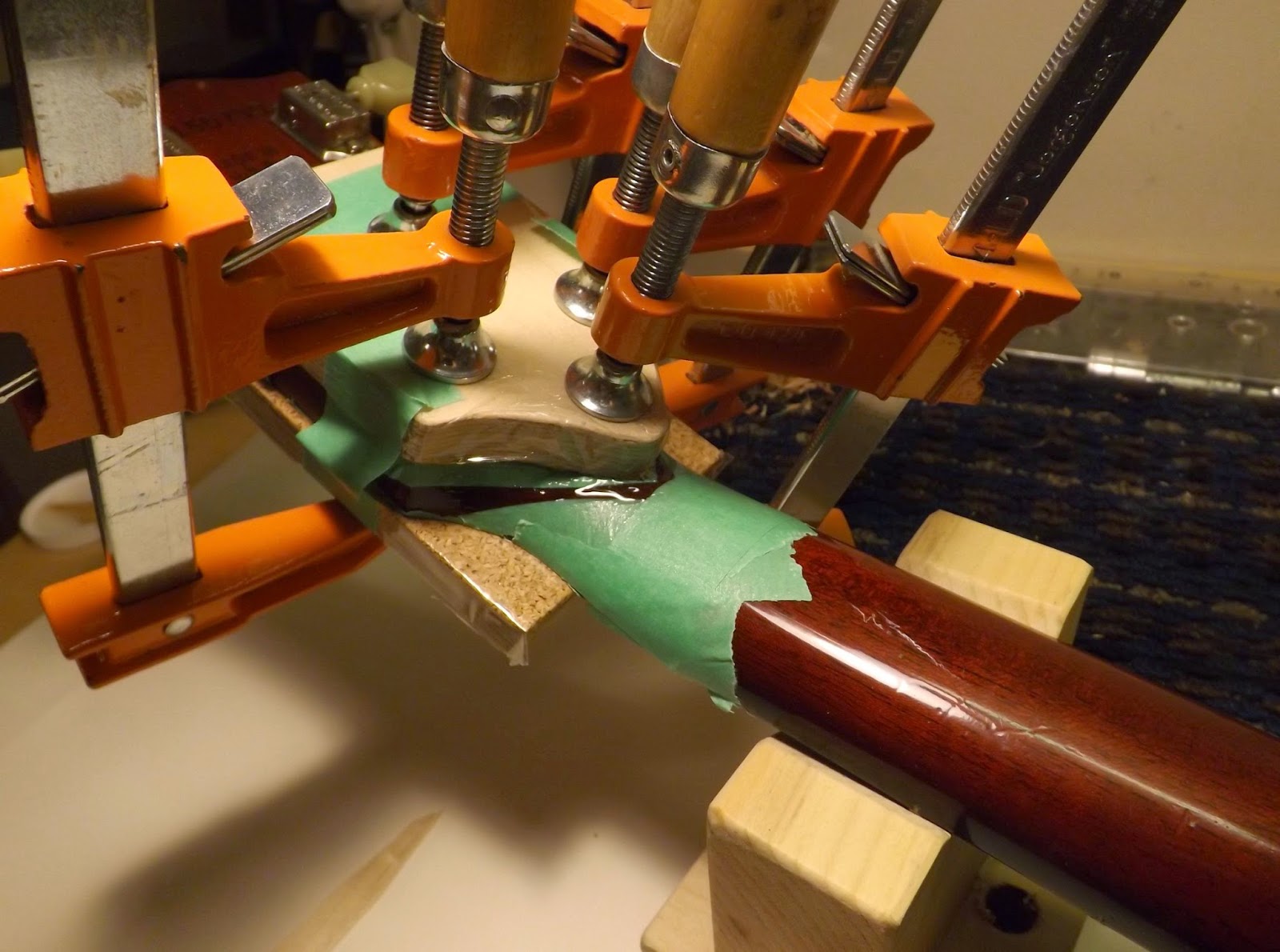 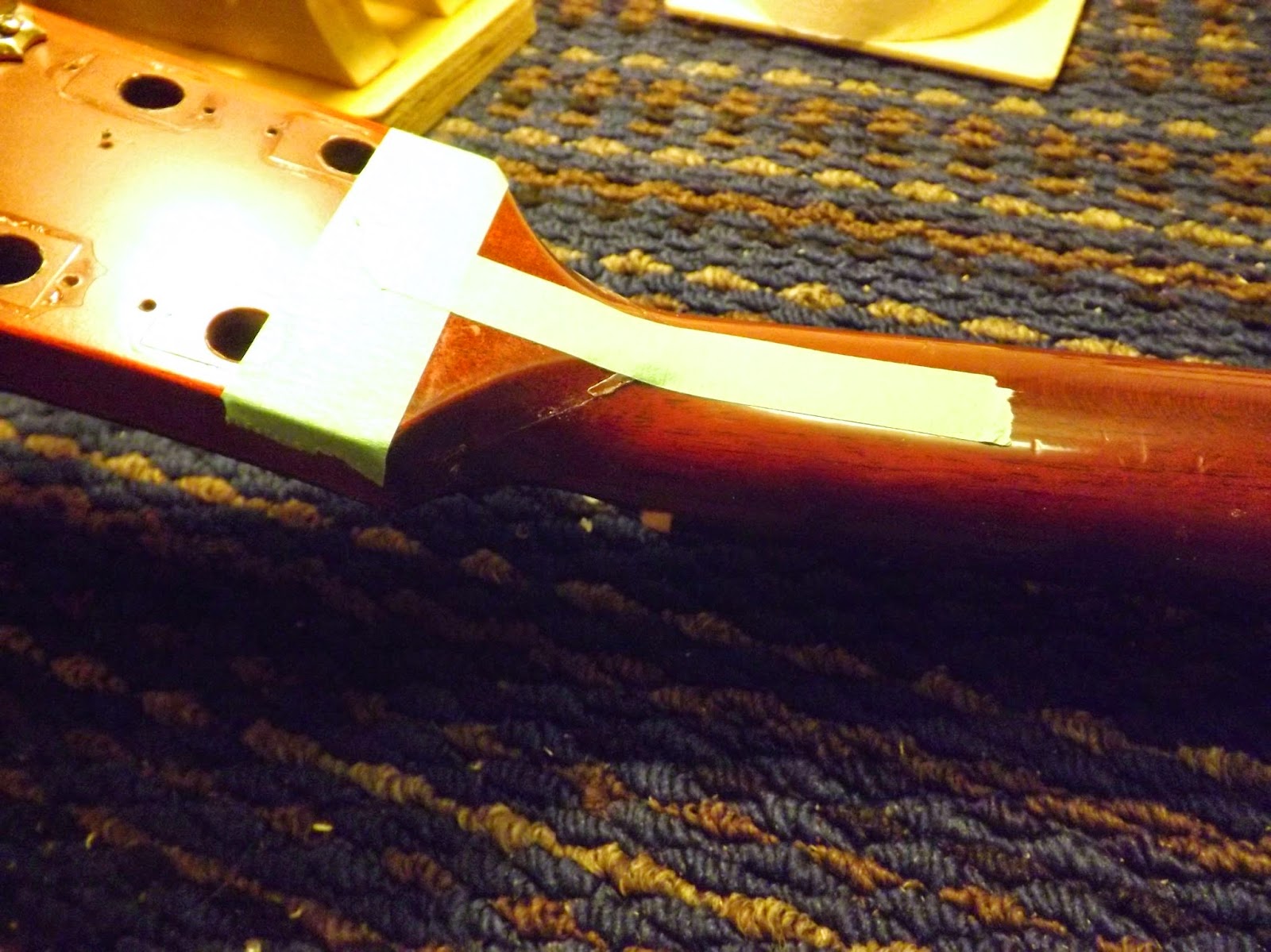 Things came together nicely, and it was time to add reinforcements. I don't usually use them on first-time breaks, but this guitar sees a lot of hard playing and this being the second repair, I thought they'd be added insurance. I mapped out the truss rod and figured out where I wanted them to be. 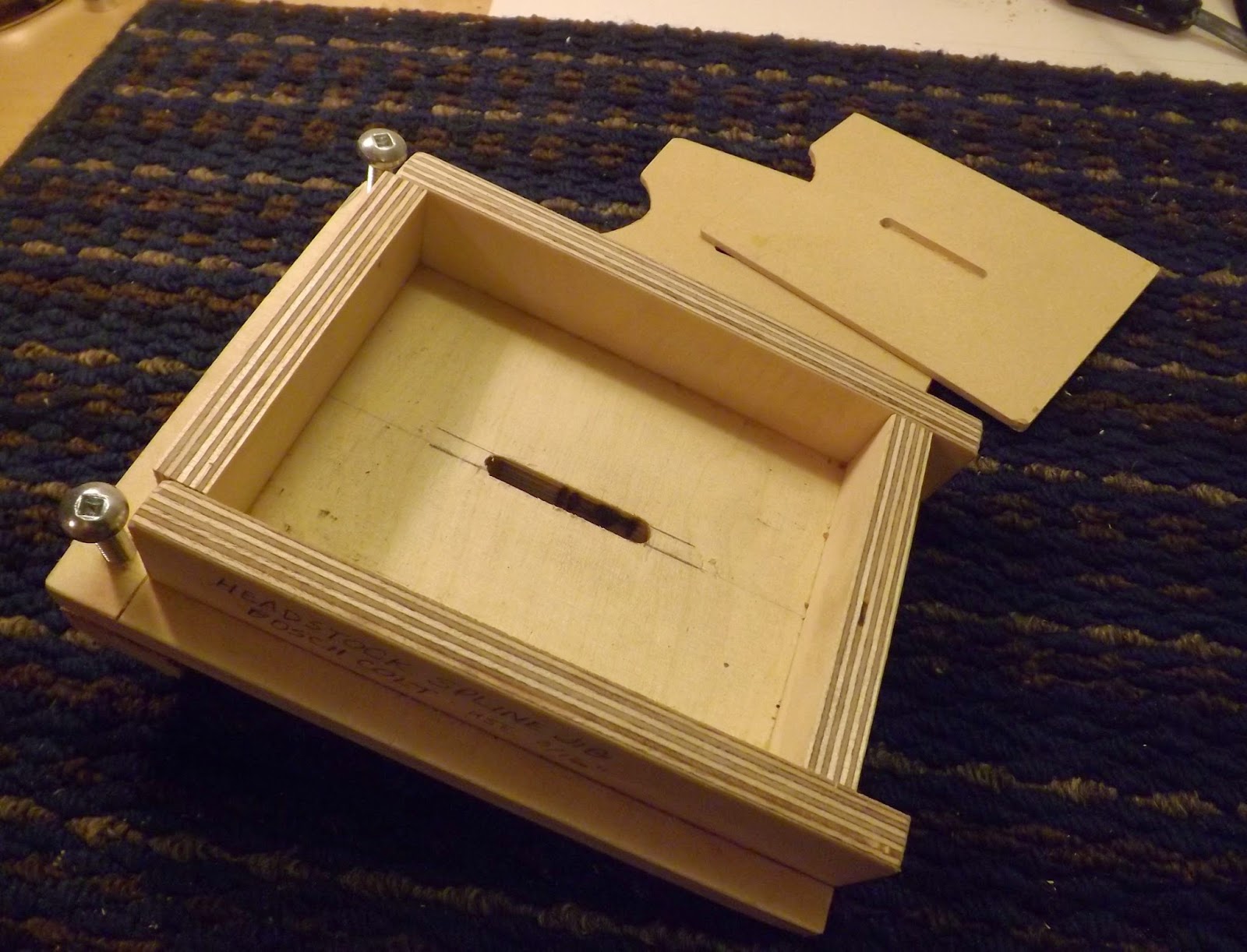 Here's my low-tech spline cutting jig.  It's just a platform that's sized to fit the base of my laminate-trimmer with no play. It allows 1-3/4" of travel. The depth adjustment on most laminate trimmers isn't very precise - the router isn't held perfectly concentric with the base so when you increase the cut the channel often ends up with stepped walls.  I eliminate that problem by using inserts which raise the base off the jig in 1/8" increments.  I make a pass, stop the router, remove an insert and repeat.  It works well.  To do the cutting I like a high-speed steel spiral upcut bit.  These don't last as long as carbide, but they're far sharper and less prone to chipping the finish on the margins of the cut. They also make excellent plunge cuts in hard material. 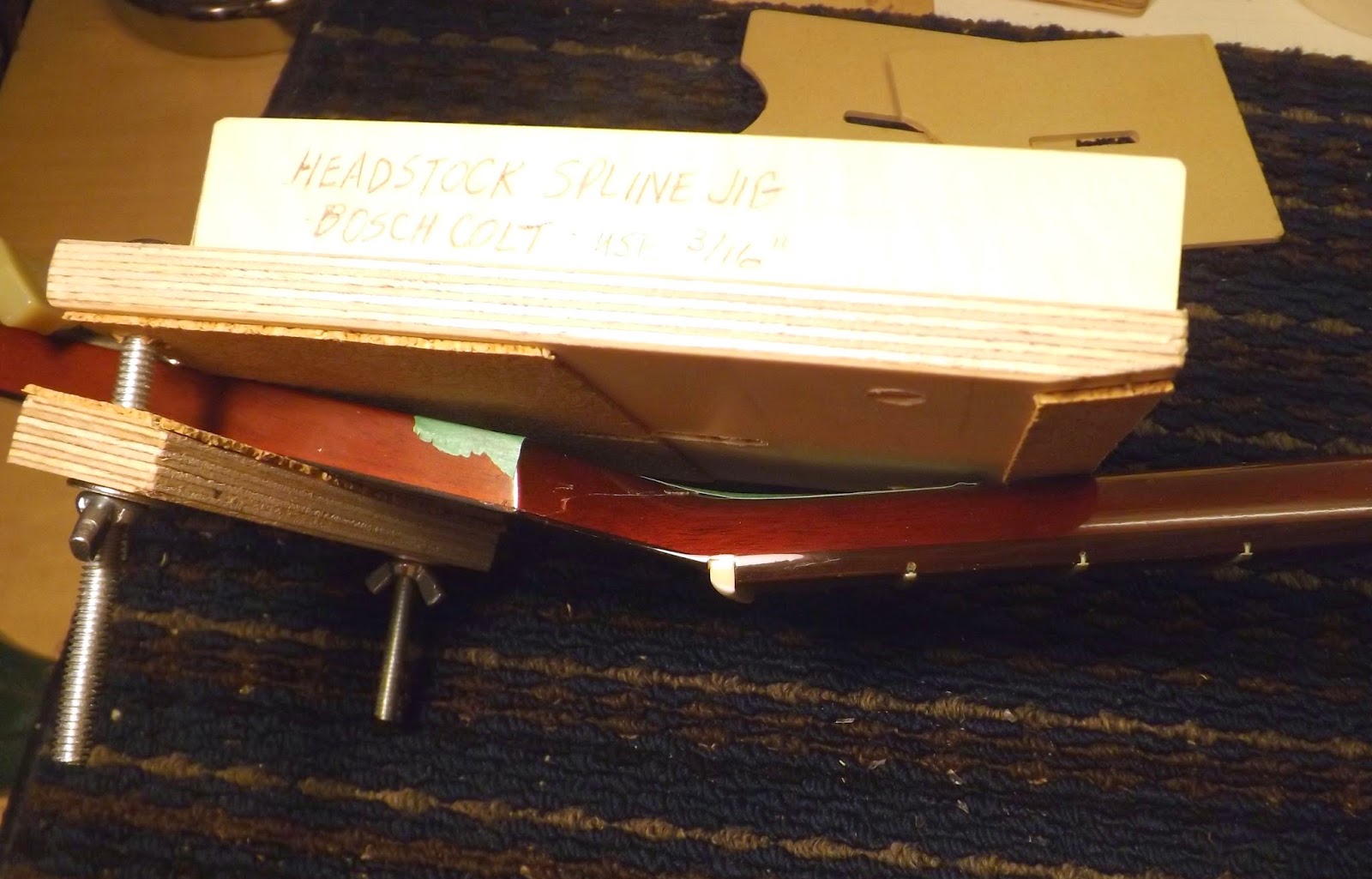 The jig in place.  The surfaces are padded, and there's a 15 degree bevel on the right side.  I measure the depth carefully so as not to rout completely through the headstock. (That would be baaaad....) 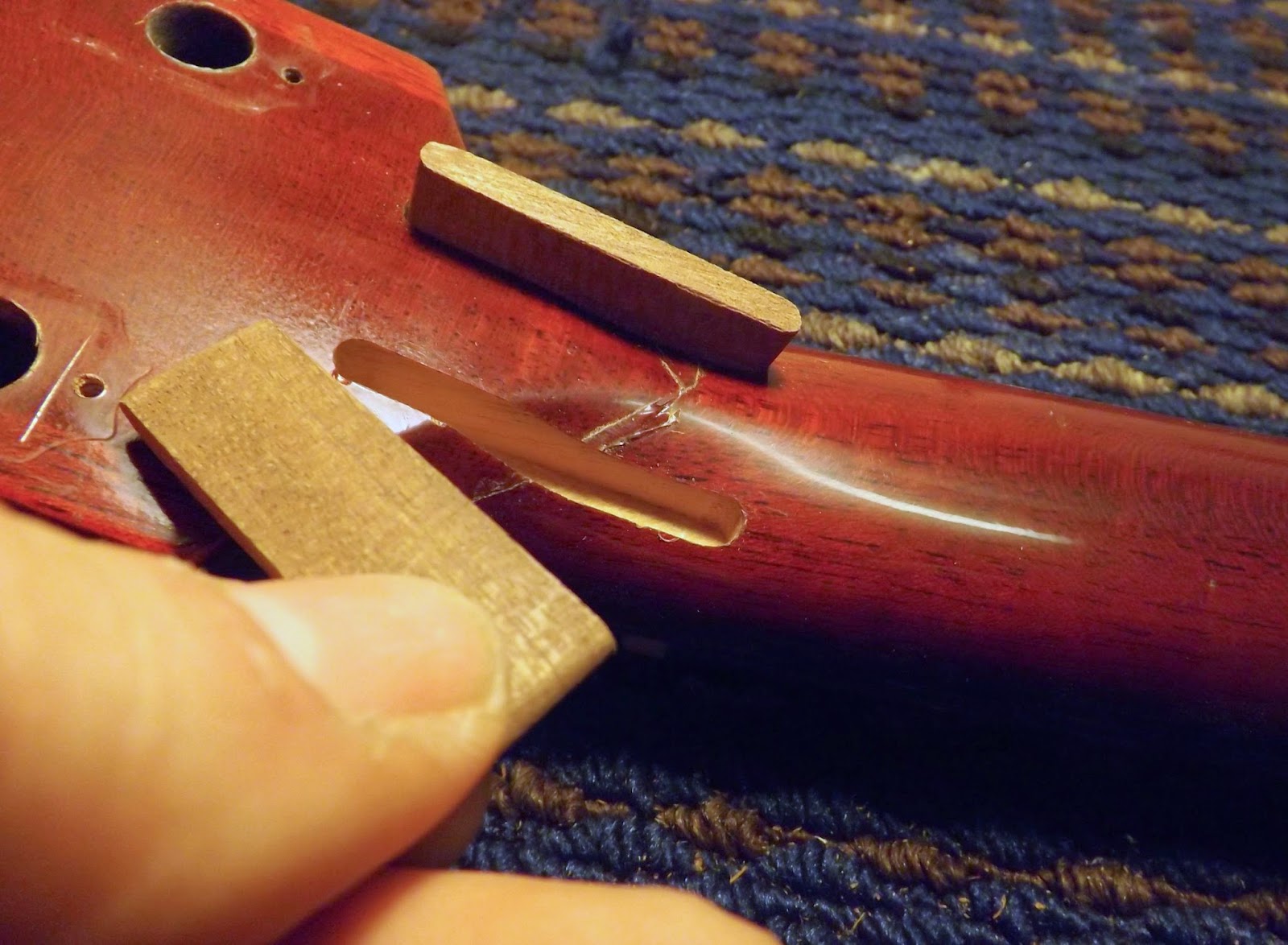 Here are some splines from African mahogany. I take time to make sure they fit really closely before gluing them in with standard wood glue. Carving away the excess comes next, which is fun!  The goal is to match the contours as closely as possible without damaging the surrounding lacquer.  In the end it's important to know when you've reached "good enough". 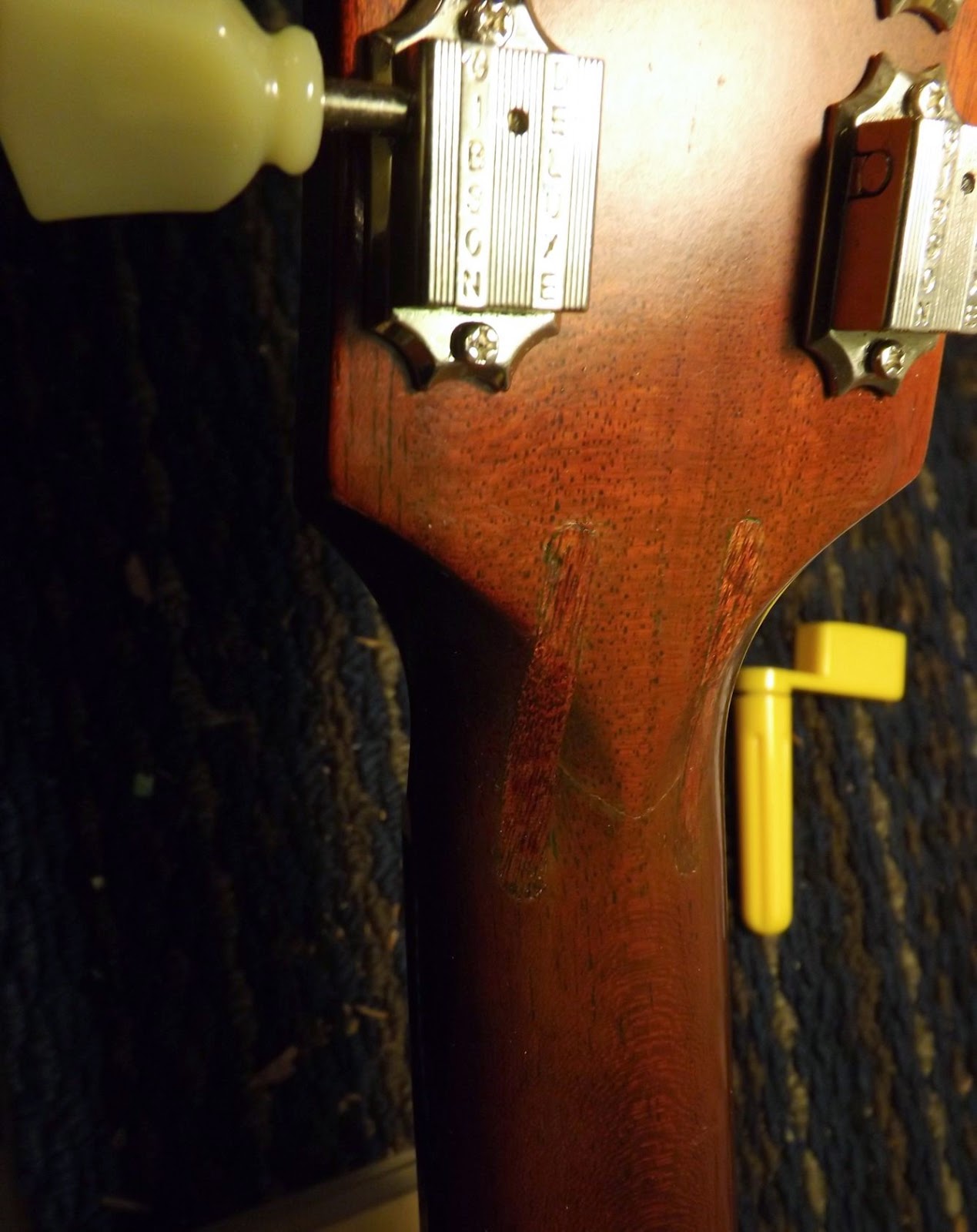 A dab of color, a smear of lacquer, a little buffing by hand and it's ready to play again.